As a fan of Dwayne "The Rock" Johnson, I've always been disappointed that his movies that I enjoy ("Southland Tales," "Walking Tall" and "The Rundown" were made at the beginning of his post-wrestling career. Since then, he's done a few lame cookie-cutter hit movies ("Get Smart," "The Game Plan" and "Race to Witch Mountain") he's made some astoundingly awful choices ("The Tooth Fairy" and "Doom") and he was even in something so hideously disgusting that all record of it should be expunged from the history of the Earth (a Tyler Perry movie).

So maybe it's that drought of good movies that has me optimistic for his newest film "Faster." It looks to be the kind of movie that you would have expected The Rock to make 10 years ago when he decided to stop giving Mick Foley brain damage and start making movies. It's about a dude who decides to get revenge on some punks that killed someone he loved. Fuck yes! That's all I need to know!

Hopefully it's good and we'll discuss it on a sequel to our Revenge Theme Show.


I should say, though, that one of Johnson's crappier movies did spawn one of my favorite internet memes of all time: 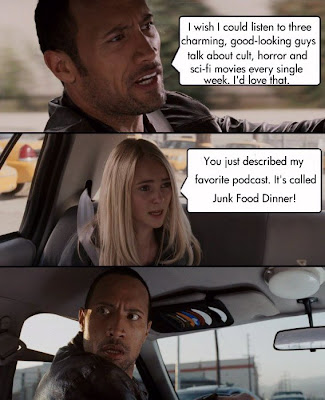