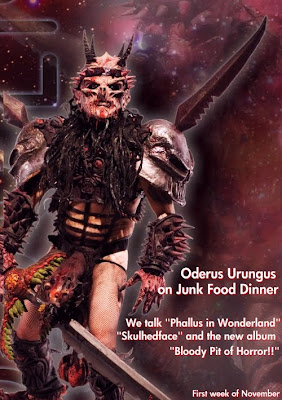 If you haven't listened to JFD29 go do it now, otherwise you're gonna get a spoiler. If you've already listened, congratulations! You're a good JFD fan!

The good news is, we've suckered another awesome celebrity to be on the show and let us ask them questions! In the first week of November, we'll unveil our GWAR Theme Show with special guest Oderus Urungus (aka Dave Brockie)!!

We'll discuss the GWAR films "Phallus in Wonderland" and "Skulhedface" then talk to Dave about the making of those films, future GWAR films and the band's inevitable rape of humankind.

In the meantime, go to Gwar's Website to check out their tour dates because you need to see the greatest band in the world before you die (in this case, very shortly before you die (because GWAR will rape and murder you at the show)). Also, watch GWAR on the Jimmy Fallon show on Oct. 28!!

And be sure to BUY GWAR's new album "Bloody Pit of Horror" on Nov. 9!