Since I only saw six new releases of the many that were released this 2010. I have listed the most notable five of them in order, rated “meh” to “awesome.” (Note: I also saw Inception. Double “meh”)

I indeed saw this movie. Knowing Tina Fey on "30 Rock" and Steve Carrell of "The Daily Show" and "The Office" if you really want to talk about it, one would think this would be non-stop hilarity. But it falls short. Why? Because a movie executive thought “Hey- wouldn’t it be great if we got two really funny people to play a boring restricted suburban couple?!?” Hopefully, that executive was fired shortly after. If you do watch this film, you will be surprised at the chemistry between James Franco and Mila Kunis as methed-out couple who whore each other out for drug money. Guaranteed, the movie should have been about their date night.

This was a good effort at a new age grindhouse feature, by grindhouse fan-boy: Robert Rodriguez. I like this sort of film to an extent, but rather than nerd-out at the allusions to grindhouse features (i.e. cheesy film music, over-the-top action scenes), I see these less as a tribute and more of an attempt to revive an exact concept that already had its day. Have you ever listened to Amy Winehouse and thought “Yeah, Motown was pretty alright”? Is your next thought “I should keep listening to Amy Winehouse” or “I should check out more Motown”? For me, it’s the latter, and for Machete, I just wanted to watch an original grindhouse feature instead. Besides, Tarantino perfected grindhouse as a cinematic voice with “Inglorious Basterds.” 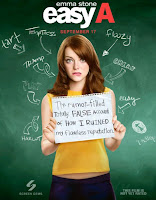 Surprisingly smart and funny. The ending was a little hokey, but what’s to be done with a teen rom-com that typically ends with the girl winning prince charming? To be sure, this movie, being smart and funny, approaches said typical ending with a unique charm that changes the tone of teenage rom-coms. Instead of high school being one huge party, ala Can’t Hardly Wait (the most disappointing non-Replacements associated film whilst remaining a Replacements-inspired title for a film). The characters, in "Gilmore Girls" fashion, confront sexual awareness, motives, and cues with a more matured and funny approach, which picks up where Superbad left off, by which I mean the credits don’t roll with a bunch of drawings of dicks in the background. I know: dicks are hilarious, but so is smart humor. And Emma Stone shows the potential to be really hilarious with subtlety and pratfalls, like a female Chevy Chase. In short, I wish I had more teen movies like this growing up, so I could have taken my non-existing high school girlfriends to see them.

2. Scott Pilgrim vs. the World

A surprise knock-out, this film actually delivers as the best comic to screen translation of any comic book movie I have ever seen, and I, need I remind you, am a total fucking nerd who will freely indulge in Spider-Man slash fiction just to see if it follows cannon. On that note, Scott Pilgrim proves that you do not need to follow cannon to successfully present a comic book on the screen. If anyone remembers Sin City, you know how close filmmaking came to capturing the pace and tone of a comic, but shot-for-shot didn’t cut it. If anyone remembers Ang Lee’s "The Hulk," you know how far filmmaking falls when they try to adapt comic panel shots. But Edgar Wright has the spastic eye of every-nerd to capture the pace and tone of reading a comic to the screen. He managed to fill each shot with vividness, action, or emotion, with quickjumps that mimicked our shifting, comic-reading eyes, and it worked ten-fold. You can say the ending totally missed the mark and that you don’t agree with having to fight for a girl to make her like you, but the direction, and the visual cues and effects, promoted this movie to the best comic adaptation I have seen yet. (PS, the comic series, six books total, is a good read if you have a free afternoon).

I love the Coen brothers, but I love them like my own brother—it’s unconditional, but not blind. “'Ladykillers' sucked,” “'Burn After Reading' was dull,” blah blah blah. I know, and Neil Young came out with that “Trans” album. All artists do some really off-the-mark stuff sometimes, but they can also produce a work that rallies their own craft and raises the bar for their peers. So accomplishes "True Grit." Any memories you may have of John Wayne’s original adaptation of the western novel will, unfortunately, not hold as much clout as this film. The Coens seamlessly meld the best of their subtle humor, colloquial quirks, and human struggle into what may be their best mainstream feature. By this I mean: If “No Country for Old Men” was for the Oscar and “A Serious Man” was for themselves, then “True Grit” is their contribution to the tradition of quality American cinema. The characters are not too over-the-top, the pacing will keep you interested, the action sequences are entertaining without CGI; simply, it’s a tribute to what American movies could be if Hollywood were not concerned with summer blockbusters (see: opposite of "Date Night"). Mind you, this is not the Coens being nostalgic for a previous cinema trope, like “Machete,” but showing balance, craft, and a wide-appeal in story-telling on film. It’s a foolish dream, but I genuinely hope this film sparks another renaissance for American film-making, or at least pushes Michael Bay out of everyone’s consciousness.

Lottery Ticket: Grown-up Bow-Wow and a cast of dozens star in this tale of boy traveling in a dystopian SoCal to collect the word “Lottery” among thousands of lucky game pieces. Awesome.

The Book of Eli: Hey! Eli wrote a book! And it’s got pictures!

The Wolfman: Finally, someone had the good sense to do a biopic on DJ Wolfman Jack. Anthony Hopkins and Benecio del Toro are in it for some reason.

Jason Frisbie is a stand-up fellow and occasionally guest hosts on Junk Food Dinner. For more Jason Frisbie, check out JFD5 and JFD14.
To comment on Mr. Frisbie's list, email JFDPodcast@gmail.com or just ... you know... leave a comment.
And keep your eyes on JunkFoodDinner.com for more Top Movies of 2010 lists from your JFD hosts, co-hosts and contributors.
Labels: Coen Brothers Date Night Easy A Inception Jason Frisbie Machete Scott Pilgrim vs. The World Top 5 of 2010 True Grit