Top 5 Movies of the Year: Kevin

I love science fiction horror, especially with an emphasis on the science part. Scientifi

c experiments gone awry, researchers pushing the boundaries of science with horrific results, these things have been the cornerstones of good sci-fi/horror flicks for decades. Sadly, with Hollywood’s recent addiction to mindless re-makes and adaptations, there has been a severe shortage of good, original, sci-fi/horror lately. I think that’s why Vicenzo Natali’s Splice was such a welcomed addition to the genre when it was released this summer. While this certainly isn’t a perfect film (the wheels kind of start falling off the last 20 minutes), I think Adrien Brody and Sarah Polley deliver good performances as the two genetic engineers/lovers who test the limits of science and ethics, and the creature effects on Dren (the human/animal hybrid monster they create) are fantastic. I had a lot of fun with this in the theater and it makes an enjoyable rental for sci-fi fans desperately seeking original material.

re a lot of great documentaries released in 2010 (Exit Through the Gift Shop, American Grindhouse, The Wild and Wonderful Whites of West Virginia, etc); the one that I found the most entertaining and (surprisingly) the most touching was Ben Stienbauer’s Winnebago Man. At first, you wonder how a 4-minute YouTube clip of outtakes from a Winnebago sales video, in which an angry salesman messes up and curses up a storm, could translate into a full-length documentary. Well, in Stienbaur’s search to track down the reclusive “Winnebago Man” behind the clip, Jack Rebney, he uncovers a lot of truths about modern media, life, friendship and regret and proves there’s a little “Winnebago Man” in all of us.

n of his awesome Machete trailer from 2007’s Grindhouse. From the first announcement that the film was a go to the seemingly weekly updates of new cast members, my anticipation was palpable. In many respects Machete delivered on the over-the-top action, violence and tongue-in-cheek political satire hinted at in the original trailer. Surprisingly, the film was not as much of a throwback to exploitation films of the 1970’s as many were expecting. Instead, the film was more akin to Rodriguez’s past Mexican-centric action efforts El Mariachi and Desperado, which was fine by me, as I am a big fan of those films as well. It was also great to see long-time character actor Danny Trejo in a leading role, opposed to the standard gang member/henchman roles he normally plays. While Trejo’s acting is far from superb, it’s perfect for the soft-spoken, tough-as-nails renegade.

Despite my distaste for the highly overrated Leonardo DiCaprio, I plunked down my hard earned cash to see him on the big screen for the second time in 2010 (the first time being Shutter

Island). By the time I saw Christopher Nolan’s Inception, the buzz around the film was already at fever pitch. Critics and colleagues alike were praising the film as a dense, psychological thrill ride with mind-blowing special effects. I thought for sure there was no way, with this kind of hype, the film could be anything but a disappointment. I was a huge fan of Nolan’s 2000 film Memento, but was left feeling out in the cold when it came to his revamping of the Batman franchise. While everyone in the world was praising those films as masterpieces, I was left pining for the Tim Burton Batman days. So, needless to say, I was expecting a similar reaction to Nolan’s newest “masterpiece”. However, to my surprise, not only did Inception live up to the hype surrounding it, it exceeded it. Like Memento, the story was complex and layered and really made you think about what reality you were experiencing during the film and despite its 148 minute runtime, the film kept me on the edge of my seat throughout and was never boring. While DiCaprio and co-stars Ellen Page and Joseph Gordon-Levitt were fine (there are a slew of young, talented actors who could have played those roles with just as much impact), the real star of the film is the Nolan’s nuanced writing and the inventive visual effects. My only regret about Inception is that I’ve read that Christopher Nolan had originally penned the film as a horror flick(!), which I would have been way cool. But as it stands, Inception is still one of the best films I’ve seen in a while. 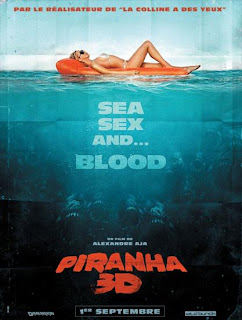 , but let me explain; I don’t mind remakes, if they’re done right. In fact, two of my all-time favorite films (John Carpenter’s The Thing and David Chronenberg’s The Fly) are remakes. What I don’t like is sub-par remakes of classic films (usually horror) made specifically to cash in on the original film’s name recognition (Texas Chainsaw Massacre, Friday the 13th, Nightmare on Elm Street, etc, etc). I don’t feel like Alexandre Aja’s remake of Joe Dante’s 1978 drive-in classic falls into that category for a few reasons. First, the original Piranha doesn’t have the name recognition that those other films have. In fact, it’s pretty much unknown outside cult/horror fans, so I don’t think they were trying to cash in on the original’s legacy. Second, it’s only a remake in title and premise. Beyond that, much of the storyline and characters are totally different from the original. But being a passable remake is not the reason this film is at the top of my year-end list. It’s #1 because this movie is F-U-N with a capital F! This movie makes no bones about what it is. From the great opening scene with Richard Dreyfuss to the end credits, this movie slaps you across the face with as much blood and boobs as it can cram into its 90-minute runtime. Is it mindless, one-dimensional, base and generally devoid of any real artistic merit? Of course it is! And what the hell’s wrong with that?! Hollywood used to crank out movies like this for the drive-in and grindhouse circuits and then later for the home video market. But now, good movies are good and bad movies are bad (usually bad). There are very few good bad movies anymore (and let’s face it, those are our goddamn bread and butter here at JFD) and this movie is a REALLY good bad movie. Plus, I’m not ashamed to admit that I love 3-D. I think it makes going to the theater fun again and helps me justify spending $10 on a movie I’ll be able to download in a week. But more often than not, 3-D is reserved for glossy CGI kiddie flicks or mega-budget action films. To see this kind of gratuitous sleaze cinema get the 3-D treatment was truly exciting and I hope Piranha’s 55 million dollar profit pushes Hollywood to releases more of this kind of campy fun for low-brow schlock fans like myself to devour.

NOTE: Since the creation of this list I have seen True Grit, Black Swan & Winter's Bone. While they are all "technically" better movies than many of the films listed here, I still stand by my picks.

While I'm certain that there were worse movies released in 2010, the worst one I saw was Paranormal Activity 2. I caught this on a drive-in triple feature along with Let Me In and Jackass 3. This rushed sequel to last year's low-budget, surprise hit was so boring, contrived and unnecessary it was genuinely maddening. Honestly, I wasn't as blown away by the first film as many horror fans were, so this stinker landed in my lap with an even more pronounced thud. Look for this pile of shit in 99 cent bins across the country in 2011. 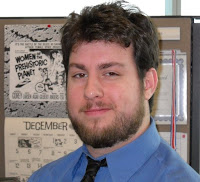 Kevin Moss is a proud "geek from Ohio with entirely too much time on his hands". When he's not hosting Junk Food Dinner, you can usually find him playing drums with his band The Northwest Ordinance (who perform the Junk Food Dinner theme song) or hanging out with Junk Food Dinner announcer Laura Skaggs. He has never been in a fight, but is convinced he would win if he ever was. He also once had a cop pull a gun on him while he was on the toilet.
Keep an eye on the website for more Top 5 lists from JFD alum. And we'll return with a new episode on January 5.
Labels: Alexandre Aja Ben Stienbauer Christopher Nolan Danny Trejo Inception Jack Rebney Machete Piranha 3-D Robert Rodriguez Sarah Polley splice Top 5 of 2010 Vicenzo Natali Winnebago Man