Top 5 Movies of the Year: Parker

"Machete" is a highly enjoyable, but also fairly flawed exploitation throwback flick from Robert Rodriguez. It actually just barely breezed into my top five after a very recent second viewing of it made me realize that even though Machete's highs aren't as high as the ones I experienced in my now #6 movie of the year, "A Nightmare on Elm Street," its lows certainly aren't as dreadfully low. The parts I didn't care for in "Machete" made me leave the theater mumbling "so, what the hell happened to Tom Savini, anyway?" but the lows in "Nightmare" (i.e. that Joy Division kid and the CGI deaths) made me want to punch everyone's faces while peeing on them. Anyway, "Machete" is action-packed, hilarious at times and does bring me back to the glory days of not only the exploitation flicks its paying homage to, but action films in general. (Mostly) gone are the days when Stallone or Arnold would gratuitously blow up 40 or 50 thugs in one scene and still be considered "good guys" who'd get a line of action figures. Now, we have stuff like "Inception" and "Transformers" being passed off as "action" flicks.
Also, Jeff "Le Penis" Fahey gives a great performance.
4. Jackass 3-D

What can I say? I haven't had this much straight up, pure and simple fun watching a movie since ... well, probably since "Jackass: Number Two." Watching the Jackass clan get back together and come up with ways to torture themselves to make us giggle is just fun. If you can watch things like the multiple midget scene from this third installment and not laugh, well, then your cold, dead heart would be better suited memorizing Asimov's Three Laws of Robotics because they apply to you.
At this point, I've been watching watching Jackass for a third of my life, which made the look back at the gang's past and their first Jackass clips over the ending credits, (accompanied by that great Weezer song) a surprisingly sentimental trip down memory lane. It's also been about a third of my life since I've heard a great Weezer song, so that was nice, too.
3. Frozen

I was excited for this movie when it was first making rumblings and while I still had the idea that Adam Green was an "acceptable" director after I saw the first Hatchet movie, which I also found "acceptable." I finally got to watch "Frozen" a couple of weeks ago, just one night after enduring the abortion known as "Hatchet II." Needless to say, I wasn't expecting much from this icy Green installment afterall, but I was quickly glued to the tube as this story unfolded. This film is driven by very believable characters, a believable situation and good dialogue. Then the film hits on so many deep-rooted human fears while these three skiers find themselves trapped on a ski lift, left alone as the workers leave for the week. The simple idea is done in a wonderful, minimalist fashion, as most of the movie is just these three characters dealing with the hopelessness of their situation.
This film is a beautifully effective exercise in fear, tension and atmosphere.
2. A Serbian Film

I'd heard vague things about this movie on message boards and from friends for a while and it really got my interest when people I knew who were horror vets and gore hounds were coming out saying this movie crossed a line or was too much for them. I went into the movie thinking that such a movie would be a cute breeze. Afterall, I consider "American Psycho" light, summer reading.
Turns out, this is absolutely the most disturbing movie I've ever seen. Of course, as a man who knows Asimov's Three Law of Robotics because they apply to his cold, dead heart, that doesn't mean I didn't like this film. This film will forever haunt the far corners of my brain. Like I said on the show, the disgusting things that happen in this film are made so disgusting by virtue of the fact that this movie is made so chillingly well. Great writing, direction and acting culminate in one of the most horrifying nihilistic endings this side of "The Mist."
If you fancy yourself brave and wanna watch this, just remember that when you think things can't get any worse, they do.
1. Toy Story 3

The only logical choice after "A Serbian Film," I suppose. This is just a perfect movie. It'll run you through a gauntlet of emotion and it closes one of the best movie franchises in history out on high note. It's kind of unbelievable how Pixar can hit so many movies out of the park, not just in terms of different films, but I doubt there is any trilogy of films better than "Toy Story." Other trilogies fall short in spots ("Star Wars," "Lord of the Rings") or just completely implode into a pile of crap ("Spider-Man," "Scream"), but "Toy Story" is consistently good, or even, arguably, gets better.
Worst Movie of 2010: Hatchet II

Our ridiculing of Adam Green for his handling of the abysmal failure that is Hatchet II's unrated release has been well-documented on many episodes of the show. To pretend to be a martyr standing up against the MPAA's censorship is just a mammoth douche bag ego move. The reality of Hatchet II's removal from theaters is due to the fact that the movie didn't make theaters enough money to pay their workers to sell popcorn to the non-existent ticket-buyers of "Hatchet II."
Green's insistence that "Hatchet" is "old-school American Horror" is absurd. It's a lame ploy to tug at the nostalgia of us kids who grew up with VCRs and parents who didn't care what we watched on them. In reality, the Hatchet films are to horror what those "Epic Movie" movies are to ... well, movies. "If we get Robert Englund AND Kane Hodder in the same movie, will you like us," Green seems to be begging the audience. "What if we throw Danielle Harris into an already established role and give Tony Todd more lines? What if we make references to other horror franchises being 'real?'"
"Hatchet II" is laughably bad. For a movie set in New Orleans, there's not a single Cajun accent, which I guess is the least of why this movie sucks, but it's also a great example of the insane carelessness of the filmmaker. "Who cares about the acting or story when we have 300 gallons of fake blood?!" 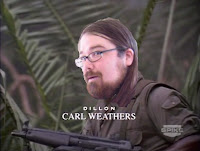 Parker co-hosts Junk Food Dinner like every single week. You should probably know that already. You can check out his almost-never-updated blog here or follow him on Twitter.
To comment on Parker's list, email JFDPodcast@gmail.com or just ... leave a comment.
Keep an eye on the website for more Top 5 lists from JFD alum. And we'll return with a new episode on January 5.
Labels: A Nightmare on Elm Street A Serbian Film Adam Green Frozen Hatchet 2 Jackass Machete Robert Rodriguez Top 5 of 2010 Toy Story 3