WWE wrestler Goldust (aka Dustin Runnels) has announced via Twitter that he'll be directing, producing and appearing in an upcoming film called "The Fire Witch." 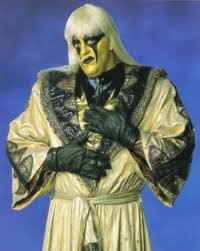 It's been well documented on the show that I'm a fan of wrestlers trying their hands in Hollywood (The Rock in "Southland Tales" (JFD5) and Roddy Piper in "Hell Comes to Frogtown" (JFD1) and "They Live" (JFD21)). So, while I'm not sure if I'm totally optimistic for this, I'm definitely interested. Goldust was one of my favorite wrestlers when I watched regularly and WWE's other horror movie production, 2006's "See No Evil" was pretty fun. So this film seems worthy of keeping an eye on.