My hometown of Dayton, Ohio lost a television icon slash legend this week. While it may be true that every town has a horror host (or two), Dr. Creep (aka Barry Hobart) seemed to evoke the proverbial "much love" from Dayton in a way that seems unique. It's not just weirdo horror fans or nostalgic insomniacs that were fans of Dr. Creep. I don't think I've met a Daytonian that wasn't fond of, or at least aware of the city's fondness for, Dr. Creep. 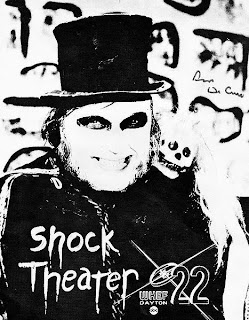 Dr. Creep's "Shock Theater" ran in Dayton on WKEF in various forms from 1972 to 1985, a length of time that seems almost inconceivable by today's disposal-culture standards. Not to mention the fact that it seems like some kind of Twilight Zone bizarro world that local channels would feature local programming. The show resurrected itself as "The New Shock Theater" on Public Access in 1999 and ran for a few more years.

I was first introduced to Dr. Creep when a few friends and I went to the first annual Horrorama in 1997. The crowd consisted basically of us, about 25 people who left after the horror marathon's first film "Scream" and a (very) small handful of die-hard horror fans. Me and friends were all pretty infatuated with Creep while talking to him after the show.

Later, when telling my mom and dad that we'd seen this dude, Dr. Creep, I was absolutely flabbergasted when they not only knew who he was, but seemed to have the same infatuation I did. I think this was the first time that I not only agreed with my parents about something, but it was the first time that we were aware of what the other was talking about in terms of pop culture. (This would pretty much not ever happen again, though.) On a later trip to a comic book shop in Yellow Springs with my grandma, I asked if she'd get buy me a Dr. Creep shirt, to which she replied something along the lines of "Of course. His show was just charming." To this day, my grandma clips out and sends me the stories whenever Dr. Creep is in the newspaper.

Dr. Creep appeared at Halloween and horror events, despite his deteriorating health, up until his death Friday. Dayton will forever be a little less interesting, a little less cool and a lot less weird without Dr. Creep around.


This Wednesday at 8 p.m. est, Kaleidoscope Radio will be having a special show paying tribute to Dr. Creep, so tune in. You can also find more on Dr. Creep (and a zillion other horror hosts (including Dayton's A. Ghastlee Ghoul)) by watching "American Scary," a documentary on the subject. I'm pretty sure it's on instant watch, so queue it up and take in a fun piece of American television history.