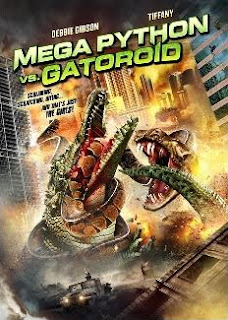 It's the contemporary genre B-movie post-modern novelty casting event of the season! Don't miss it! I haven't been this excited since 2 cast members from "Famliy Ties" were in "Airline Disaster"! Plus just think, only 15 to 20 more years and we'll get to see Britney Spears and Christina Aguilera duke it out in "Quantum Squid Vs. NepTuna"! The Asylum is the new AIP and the SyFy Channel is the new Drive-In! MPvG repeats tonight (01/29) at 1/12c if you can't catch the first showing; so remember, if you miss it, it's your own damn "MegaFault".

Also, you can catch up on previous entries into the "Mega" series this afternoon beforehand with "Mega Shark Vs. Giant Octopus" (starring Debbie Gibson) at 5/4c and "Mega Piranha" (starring Tiffany) at 7/6c, which is the other "Piranha" movie from 2010 that also features DDD. But seriously, "Mega Piranha" is suppose to be one of The Asylum's recent best and one that actually delivers some of the "Mega" fun it promises, or at least as much as one can have without rubber-suits and miniatures all the way through.