On the new episode (JFD44) I enraged everyone by shitting on Tim Burton's "Batman." Like everyone, I loved this movie as a little kid, but I grew up, read some comics and Christopher Nolan did me the personal favor of making "Batman Begins." All of that resulted in me realizing that Burton's film is a horrible piece of crap that uses Bob Kane's original comic to whipe its ass.

I found this video on youtube that touches on about 11 points that piss me off about the film.

If you're too lazy to watch, that's fine. That reviewer in the video is kind of annoying. But, a few of the points he brings up are ones that I've been trying to tell people for years before yelling the phrase "Please believe me" in their faces.

A huge reason for my dislike of this film is because Batman has absolutely no problem with killing as many bad guys as possible. At one point he even drives into the Joker's base (or something) and drops bombs in it like he's a masked Harry Truman. This may be fine for someone like Cobra or Machete, but anyone who has read a single page of a Batman comic knows that it kinda shits all over Batman's whole "If I kill criminals, I'm no better than them" mentality.

I mentioned on the show that by making the silly decision in "Batman" to have had Joker kill Batman's parents, you kinda eliminate the drive of Bruce Wayne's insane fascist crusade when Joker is eventually stopped (Read: murdered) by Batman. Even "Batman Begins" acknowledges this. There, a pre-Batman Bruce Wayne plans to shoot the guy who killed his family (NOT the Joker), but the mob beats him to it, which sets in motion the events that lead him to become the Caped Crusader. If Wayne would have shot the guy and got his revenge he would have just been arrested and gone to jail for half the time he would have if he sold weed to someone and then gone back to being a rich jaded kid.

Burton's Batman would have no reason to continue crime-fighting knowing his parents' killer was gone (read: MURDERED). Sure, like Mark said on the show, there'd be other crimes. But Batman is out there because he sees the face of his parents' killer on the face of each and every thug he breaks the legs of. Would he have the same drive knowing that he already dealt out the proper punishment to the guilty parties? Furthermore, Burton's movie becomes a story about simple revenge instead of justice and the merits of law vs. chaos.

In addition to these heavy themes, there are also retarded details that just piss me off about Burton's film. The following is taken from something I wrote a few years back about my dislike of Tim Burton:

This movie takes a huge shit on everything Batman is. Which is reasonable, because it was written by a man who's best known for his work on "Monkeybone." I mean, the movie builds up to the fact that the criminal genius known as The Joker's whole plan to take over Gotham is based around the idea that he needs to fist fight Batman in a clock tower.

And why would Bruce Wayne tell JOURNALIST Vickie Vale that he's Batman shortly after meeting her? What a shitty Bruce Wayne.

I'm sure there are many more reasons to hate Burton's "Batman." Like the fact that the comics are built around Batman and Commissioner Gordon's need to forge a symbiotic relationship for the betterment of Gotham, yet he's barely in the film or the fact that Vicki Vale is just simply gone by the start of "Batman Returns," making Bruce Wayne into James Bond.

ANYWAY- I understand that nostalgia is a big reason people like this flick, and that's fine. And it's fine if you like the performances and Burton's atmosphere. And that's cool if you like the BatDance. But let's be straight, it wasn't that good when it came out, but we were 8, so it seemed awesome. It does not stand up now and it's not a good BATMAN story at all.

And don't even get me started on those sequels. 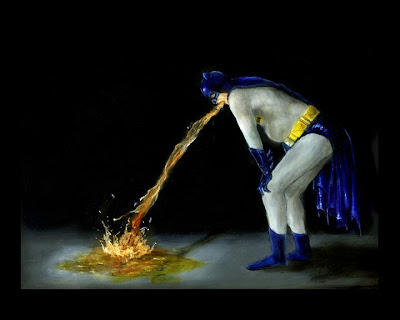