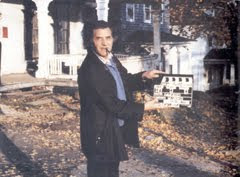 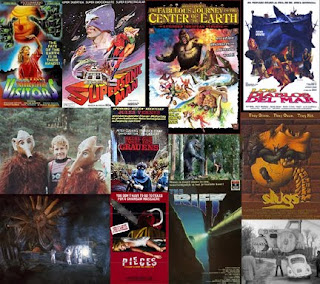 During the 70's, 80's, and 90's, independent Spanish exploitation filmmaker Juan Piquer Simon quietly and lovingly cooked up an ambitious and outrageous collection of goofy and gonzo genre cinema curiosities, full of cracked charm and fantastical old-school practical effects (rubber-suit monsters, matte paintings, opticals, etc.). Ever since I converged on Simon's wild filmography for the first time, by unintentionally discovering separate films independently of each other and then tying them all back to the same man, I have always been impressed and intrigued by his eclectic string of independently made oddball fantasy cinema delights, like; Where Time Began (aka Fabulous Journey To The Center Of The Earth) (1976), the MST3K made-famous The Pod People (1983), Supersonic Man (1979), Slugs: The Movie (1988) (served up on JFD EP#8), Mystery On Monster Island (1981), The Rift (aka Endless Descent) (1990), Sea Devils (1982), Pieces (1982), Cthulhu Mansion (1990) and Manoa, the City of Gold (1999), among others.

According to IMDB; "Simon grew up loving American cinema as a child in Franco's Spain, and even worked with some famous American filmmakers when they shot in Spain in the 1960's, before becoming a director himself. He owned his own studio and created and/or designed many of the impressive special effects sequences in his films. Recent global competition from American product in Spain forced Piquer to severely reduce his output (he couldn't get the wide theatrical releases he once enjoyed), but he's proven resilient if nothing else over the years. And while his films have been universally panned by the "establishment" critics, they have a kind of loopy, Ed Wood quality that must be endured to be fully appreciated. Of Piquer it can be said, "He makes them because he loves making them, whatever the outcome."" Simon died of lung cancer last week, on January 7th, at the age of 75. He will be missed.