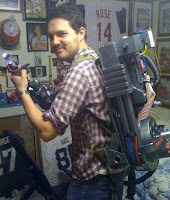 For our landmark 200th weblog post, Mr. Lee Keeler from Classy Hands sent us over this essay. Hope you enjoy!

LEE KEELER: TOP TEN MOVIES OF ALL TIME
that are action movies you actually enjoy but you can tell her they’re dramas and get away with it

10.) Memento (2000) - Before Christopher Nolan was bending our minds with Inception and refurbishing the super-hero franchise model, he blew up with a simple concept: A literally backwards movie. Genius casting of Joey Pants and Stephen Tobolowsky in supporting roles.
Dude Factor: Guy Pearce is hunting down his wife’s killer to put a bullet in his head.
What you can tell her: The story of a man haunted by chronic short-term memory trying to avenge the murder of his wife.

9.) Three Kings (1999) - David O. Russell takes himself too seriously, and most of his movies tend to be Oscar failures rather than just fun movies. Three Kings is a fun movie, and charts the course of three bored soldiers during the Gulf War, representing the ridiculous traipse of American military force in Kuwait in ‘91. And director pal Spike Jonze makes a rare and convincing acting performance.
Dude Factor: Ice Cube using Nerf footballs as grenades. Characters charge into imminent death to the soothing yacht-rock sounds of Chicago.
What you can tell her: It’s a drama about three soldiers getting over their greed to help a group of Kuwaiti rebels get to freedom, lead by George Clooney.

8.) The Thing (1982) - A lot of people look down on remakes, but if you remake a crappy film into a piece of blister-tight drama, then you’re onto something. At the peak of his game, John Carpenter takes simple elements like snow, dogs, and paranoia and camouflages them into a xenophobic spiral. Death is just outside the door, and Carpenter meticulously chisels down a fantastic ensemble cast into Kurt Russell’s finest performance.
Dude Factor: Kurt Russell is either guzzling scotch or blowing stuff up with a flamethrower every 10 minutes.
What you can tell her: It’s about a group of isolated soldiers that have to get over their cabin fever and learn to trust each other.

7.) The Lost Boys (1987) - Joel Schumacher, or as I like to call him: The Original Michael Bay, went out on a limb and took the 50’s cheese aesthetic to a small California town infested with vampires. It’s East of Eden with mullets and dirt bikes, hitting the audience with a meta-take on the entire vampire establishment from comics to Bram Stoker.
Dude Factor: Vampires are slain with squirt guns and radios that blast INXS. Death by stereo.
What you can tell her: Before Twilight watered-down the genre, a bunch of hunky teen vampires ran amok and learned how difficult it was to keep a family together while drinking blood.

6.) The Terminator (1984) - Simply put, it’s one of a handful of American films with the cajones to kill off the male protagonist. Ever the innovator, James Cameron masterfully sneaks Linda Hamilton into the role of action star as we watch two men break down trying to save/kill her.
Dude Factor: Arnold pulls his own eyeball out and is later blown up with homemade pipe bombs.
What you can tell her: A devoted hero travels through time to find his great love, saving her life so she can be the mother of a revolution.

5.) The Road Warrior (1981) - So it’s more or less a Kurosawa movie with Australian leather motor gangs set in the post-apocalypse, you wanna make something of it? This thing spits in the eye of CGI, as director George Miller rolls out an analog smash-em-up so frenetic that you overlook that all of the good guys are wearing white and the bad guys are wearing black.
Dude Factor: It’s got Bennett from Commando and a kid with a razor-blade boomerang.
What you can tell her: A ragtag community of survivors must place their lives in the hands of a mysterious and handsome outsider.

4.) L.A. Confidential (1997) - Often scuttled by noir purists behind Chinatown, this film is an unsung gem of retro cool, revealing the dirty underbelly of squeaky-clean 1950’s Los Angeles. It’s been amazing to watch the rotation of marketing for this film over the last decade: the original cover spotlighted Kim Basinger, years later Kevin Spacey, and finally Russell Crowe was placed in the foreground. It’ll be a cold day in heck when the promo gurus at Warner Bros. figure out that the strength of this film lies in each and every actor involved.
Dude Factor: Pre-gladiatorial Russell Crowe ham-fisting the wicked. Fleur-de-Lis parties.
What you can tell her: Two enemies traverse the corrupt world of law enforcement and become best friends after sharing the love of a prostitute.

3.) Children of Men (2006) - When it comes to authentic sci-fi this is yet another underdog, living deep in the shadow of Blade Runner. But where Ridley Scott’s masterpiece paces like a dinner with your grandmother, Children of Men is like crushing up uppers and sprinkling them on your White Castle while driving a getaway car. Director Alfonso Cuaron crafts a shaky-cam opus that builds steam and jettisons you back into the real world, fresh and happy to be alive.
Dude Factor: Jasper takes a car battery to the face. (Never try to extort a savior baby).
What you can tell her: A depressed former activist, played by the dapper Clive Owen, reclaims his soul by helping the only pregnant woman on earth escape those who seek to manipulate her.

2.) Predator (1987) - Alien meets The Wild Bunch. There are a score of brilliant films that deal with jungle warfare, but Predator is the ultimate post-traumatic aftershock of Vietnam culture. You either like it because you’re ironic or you just dig things that kick ass, it doesn’t matter. You just watch it. Anybody that argues against this film is a commie liar and should be subject to investigation of the House of Un-American Activities Committee.
Dude Factor: Former Governor slathers himself in mud, crushes an alien with a giant log, then gets to the choppa; said Governor ain’t got time to bleed.
What you can tell her: A platoon of ripped soldiers get lost and have to find their way out of a jungle while dealing with the emotional loss of their old friends.

1.) Goodfellas (1990) - When it comes to Scorsesian masterpieces, the films most often cited are Raging Bull and Taxi Driver. Where those titles make for stuffier viewing, Goodfellas is a pragmatic flick that views in almost any mood, and you enjoy the entire ride. It’s a clear-cut epic of a man’s rise to gangsterhood and his fall into ordinary shnookdom. The elements are impeccable: the soundtrack boasts Harry Nilsson, the shot design is sweeping and grandiose, and each cast member fits like a jewel in a crown. Goodfellas meets precisely at the impasse between classical operatic tragedy and the mushrooming culture of trigger-happy Internet gamers with ever-shortening attention spans.
Dude Factor: Henry Hill crossing the street to have a talk with the guy who got fresh with his girl.
What you can tell her: A group of ambitious young men go into independent business together, discovering in their later years how much sacrifice is involved.
Labels: Children of Men Classy Hands Goodfellas L.A. Confidential Lee Keeler Memento Predator Terminator The Lost Boys The Road Warrior The Thing Three Kings