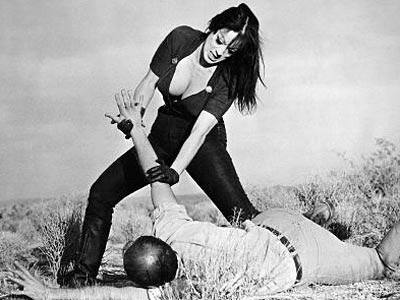 The 6'3" beauty born Tura Luna Pascual Yamaguchi in Hokkaidō, Japan began her entertainment career first as a blues singer, then gained notoriety as a model and then eventually as a burlesque dancer. 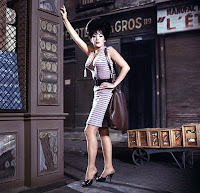 However, it was her next role as the tough-as-nails Varla in Russ Meyer's 1965 exploitation classic Faster, Pussycat! Kill!

Kill! that would cement her legacy as a cult legend. With her "take-no-prisoners" attitude, exotic beauty and plunging neckline, Tura quickly became the object of desire for many cult movies fans for generations to come. Tura was also responsible for adding key elements to the visual style and energy of the film, including her costume, makeup, use of martial arts, dialogue and the use of spinning tires in the death scene of the main male character. Meyer has cited Satana as the primary reasons for the film's lasting fame. "She and I made the movie," Meyer said.

Satana quickly became a sex symbol and even dated Elvis Presley for a while before turning down his proposal for marriage.

nt on to work with another legendary cult film director Ted V. Mikels on his 1968 sci-fi horror film The Astro-Zombies playing the not-so-creatively named Satana and in his 1974 exploitation action flick The Doll Squad playing Lavella Sumara in an all-girl group of government secret agents.

Tura then retired from acting for almost 20 years before reappearing briefly in the 1990 film Man Hands and Swollen Glands. She then reappeared 12 years later in 2002, re-teaming with Ted V. Mikels for his straight-to-video quasi-sequel to The Astro-Zombies, Mark of The Astro-Zombies. In 2009 she appeared in the retro-themed sleaze flick Sugar Boxx and provided the voice of Varla in Rob Zombie's animated film The Haunted World of El Superbeasto. Her final role was last year, again with Mikels, for the third installment of the Astro-Zombies franchise, Astro Zombies: M3 -

Even when she was not acting, Tura remained active, making several appearances at screenings of her films and at movie conventions. Despite her badass reputation, Tura is remembered by most fans as being extremely nice and personable. She has been immortalized in several drawings, paintings, songs, action figures and even a comic book based on her sex bomb persona in 2003 by Antimatter Comics.

Satana died on February 4, 2011, in Reno, Nevada. Her long-time manager, Siouxzan Perry, stated the cause of death as heart failure.

Tura Satana was a true original and will be greatly missed by fans of cult films everywhere. Junk Food Dinner salutes you, Ms. Satana. Rest in peace.