'The Stand' in the place that you live

Hey. You guys like Stephen King, right? Well, it turns out "The Stand" is gonna be turned into a real-life movie (or perhaps movies) produced by CBS. I've never read "The Stand," but I've seen most of the mini-series starring Marshall's dad from "How I Met Your Mother" and Parker Lewis. Other people were in that movie, right?

In 5th grade, I had a friend that I despised because I impressed the teacher by reading "Pet Semetery" in class, then like a week later, this friend of mine was spotted reading "The Stand" during recess. Fucking one-upper.

Anyway, Hollywood's been on this big, serialized one-a-year franchise kick for a while ("Lord of the Rings," "Harry Potter," "Twilight") and I guess "The Stand" (and the "Dark Tower" series (which is also being made)) will work well to fit into that slot, if that's the plan. 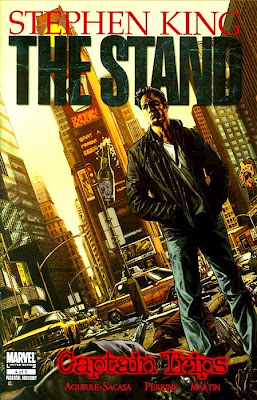