Apparently, someone is making a documentary about my hometown, Dayton, Ohio. Specifically, the North Ridge neighborhood of North Dayton. Despite the fact that this movie seems to paint Dayton in a somewhat negative, mostly accurate and undoubtedly interesting light, watching this trailer makes me hecka homesick. I used to live just a few blocks from the focal neighborhood and it was probably the best living situation I've ever had (aside from sleeping on a couch, living with three DJs (one of which would always be "spinning") and discovering mushrooms growing from weird places in the house).

Here's a description of the movie from its imdb page:

North Dixie Drive is the portrait of a small community of businesses and people residing in the Northridge section of Dayton, OH. It is the story of big time wrestlers, mechanics, a donut salesmen, an eccentric country singer, barbers, exotic dancers and car repo men. This collection of people, from all walks of life, live and work around a traffic circle situated along highway I-75, and fight to keep their lives and careers afloat in a failing economy. This debut film by Brooklyn, NY filmmaker Eric Mahoney showcases an off beat group of characters in today's Middle America.

The wrestling organization shown in the trailer is one I've seen live. My good friend GeeGee is a pro wrestler (and two-time champion) and has worked with them. I've actually seen him get beat up by those Iraqi dudes in an event hosting inside the hottest, sweatiest flea market in all of Dayton.

The aforementioned flea market is actually one I've mentioned on the show. Before it was a full-fledged flea marker, it was just a weird store where an eccentric old man sold bootleg VHS tapes and porn. This is where I got my copies of "Blackenstein," Roger Corman's "Fantastic Four" and a bunch of other stuff. Now, (or at least up until I left Dayton), there was booth specializing in VHS and DVDs from Troma, Something Weird and other such greatness. In fact, I picked up a copy of "Troma's Worst Movie" "Confederate Cannibals" there a few days before I left town.

I also bought the most booze I've ever bought in that neighborhood, got my first lap dance there and spent so much time picking up my DJ friend from his job at one of those strip clubs, that I nearly memorized all the stretch marks on all the first shifters.

The neighborhood is also just a few short blocks from one of many dead GM plants and the spot where Larry Flynt started his Hustler empire. Oh, there's also a really sleazy drive-in theater.

California's full of flakes and Okies and retarded hippies but Dayton's weirdos and rednecks and old cooks will always hold a special place in my heart. 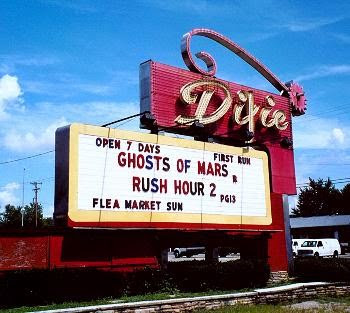