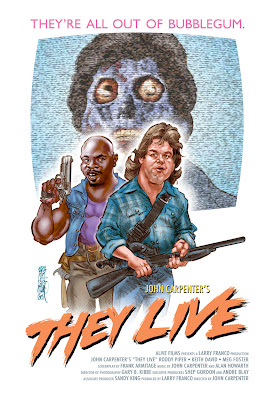 We've mentioned that Hollywood is "remaking" one of our favorite flicks "They Live." I put "remaking" in quotes on account of the film being based on a book and this new movie would just be another adaptation of that book rather than trying to remake the film itself. "Van Helsing" isn't a remake of "Dracula," but they're based on the same source material, afterall.
Anyway. Matt Reeves, director of "Cloverfield" and "Let Me In" is gonna be working on this and he's got my back on this whole not a remake thing by saying his film will be based more on the book and will be less of a satire than John Carpenter's classic flick.
We'll see how this goes. I trust Matt Reeves. Everyone said they'd rather burn out their eye holes than see a "Let the Right One In" remake and he shut their faces up with that sweet ass movie, so we'll see. We'll see.

Sweet art Via.
Labels: Cloverfield John Carpenter Let Me In Let the Right One In Matt Reeves Roddy Piper They Live