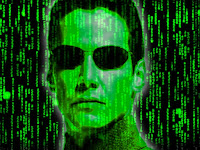 For years the Wachowski Brothers have been coasting on their claim to fame, the futuristic sci-fi epic "The Matrix". This was their tour de force and even after two mediocre sequels people still have a soft spot in their heart for the original. What people don't know is that it is all a sham. The Wachowskis are a couple of rip-off artists. Sure, you could say that they took a lot from a wide array of influences: Neo as Jesus is pretty apparent, The Matrix is a mirror on our society (or some other such bullshit), and it can go on and on. But really, they got the entire idea from the Arnold Schwarzenegger vehicle- "Commando." 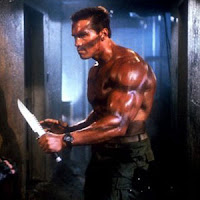 Now I know what you're thinking? "This guy is crazy and grasping at straws." Straws, you say? Well how about this straw...Arnie's name in Commando is John MATRIX. That's a little obvious you say? Maybe the term "matrix" was just used in Commando because it sounded "cool" but I counter by saying that the Wachowskis thought the same thing!

But that's not even the tip of the iceberg. Watch the beginning of Commando again. The first 5 minutes of the movie (besides when Arnold's ex-team members are murdered) is Arnie and Alyssa Milano in an extended montage of the happiest shit ever recorded. They feed a dear and put ice cream on each other's noses for Christ's sake! It may as well have been a governor election ad that he could have rerun repeatedly in California a decade and a half later. "Schwarzenegger cares about his community and their deer."

We have this perfect little setting and we transition to their perfect home in the mountains where Alyssa Milano is making Arnold some sandwiches in their perfect kitchen. These sandwiches will turn out to be the crux of my conspiracy theory. However, before they partake Arnold makes a sly comment about Boy George, who I assume the Wachowskis took to mean George Orwell which describes the dystopian society presented in The Matrix. But back to the sandwiches...

Arnold takes a bite of the sandwich and is taken aback for a second, almost like some sort of switch had been flipped in his mind. He asks Milano "What's in this?" to which she ominously replies "You DON'T wanna know." Immediately after that single bite of sandwich the entire plot of Commando falls right on top of Arnie and company. Like that bite was the catalyst for his serene and peaceful world coming apart at the seams.

What the hell was in that sandwich, you ask? Red pills. That was a red pill sandwich. Check and mate, Wachowskis.

Kevin Merryman (JFD#13, JFD#44) is an unstoppable force. Along with being a 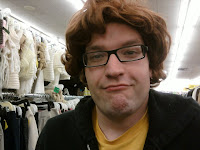 co-host of the bi-weekly "Project Parlor and Junk Food Dinner presents" movie nights in Bed-Stuy, he has recently contributed a piece for our pals over at Classy Hands. After that, he wrote this piece for us. And somehow finds time to keep up his own blog (where he recently spoke with the one and only Steven Tobolowsky about the amazing film "Two Idiots in Hollywood"!) at Cultural Atrocities. Can't nobody break-a his stride, can't nobody hold him down.
Labels: Arnold Schwarzenegger Classy Hands Commando Cultural Atrocities Keanu Reeves Kevin Merryman Project Parlor Steven Tobolowski The Matrix There is no spoon Two Idiots in Hollywood