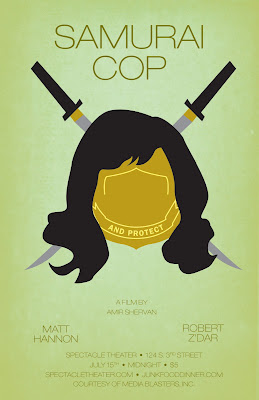 When the Yakuza infiltrate the LAPD, it's up to "samurai" Joe Marshall (Matt Hannon) and his wisecracking partner, Frank, to take them down...no matter the cost! But first they'll have to deal with the deadly Katana gang (Gerald Okamura, Robert Z'dar), a bevy of babes (Krista Lane), the worlds angriest police chief, and a whole host of other troubles. Time is running out!

Amir Shervan, who (allegedly) owned every theater in Iran, wrote and directed this film- the second in an apparent trilogy, along with HOLLYWOOD COP (1987) and KILLING AMERICAN STYLE (1991).

Once lost and now notorious, SAMURAI COP packs a punch that few can match, let alone duplicate. "Excessive" barely begins to describe every aspect of this film. Shervan pulls from all fronts of popular American cinema (action, martial arts, gore, buddy cops, beach cops, basic cable softcore, and on and on) to create a perfect combo and then serves it up on a silver platter. You'll be shaking your head as you pick your jaw up off the floor.

I WILL BRING YOU HIS HEAD AND PLACE IT ON YOUR PIANO.

Also, be sure to check out Episode #13 of Junk Food Dinner for our discussion of SAMURAI COP with guest host Kevin Merryman of Cultural Atrocities!