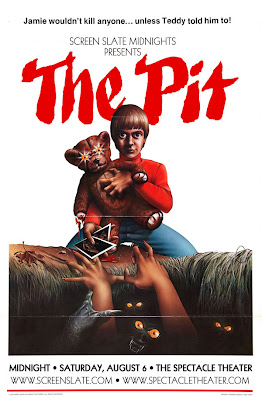 "FORGET KILL BILL, DEATH WISH AND STRAW DOGS: here is a revenge fantasy you can actually relate to. At 12-years-old, Jamie Benjamin already has a CV of torture that would make Dawn Weiner blush: the hot librarian at elementary school tears up the erotic collages he makes with her photos; the cool kid at recess splits his lip open; Jamie’s nubile live-in babysitter only has eyes for an indifferent jock; and even the old woman down the street tries to mow him down with her motorized scooter (“he’ll probably grow into one of those hippies…”). It’s not clear exactly what’s wrong with the kid—he shows signs of autism, and a creepily over-affectionate mother might have something to do with it—but he finds solace in friendship with his teddy bear and the afternoons he spends visiting a pit in the woods full of bloodthirsty, primordial trolls. The youngster does his best to see that they’re looked after, but a kid can only steal so much meat from the butcher truck before another solution is in order—and if it can satisfy two problems at once, so much the better.

Featuring a bizarre yet undeniably great performance by young Sammy Snyders, an unexpectedly sensitive portrayal of pre-adolescent sexual confusion and a few odd scenes involving a psychic teddybear—this must have been an entire subplot that was only half-assedly deleted from the movie—The Pit is a severely twisted, oddly touching and gut-bustingly hilarious realization of every kid’s fantasy to feed people who fuck with them to random trolls in exchange for friendship. Not bad for the only movie ever shot in Beaver Dam, Wisconsin."

THE PIT (Lew Lehman, 1981) Trailer from Jon Dieringer on Vimeo.

Hope to see you there!