Ice-T; most people know him best now as Detective Fin Tutuola on Law & Order: SVU or if you're a hi 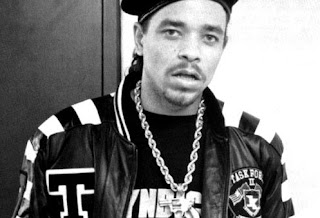 p-hop fan, like myself, you'll always remember him as one of the pioneers of "gangsta" rap before there was even a term for it. A lot of us even dig his surprisingly eclectic film career. He's been in movies as diverse as New Jack City, Surviving the Game, Tank Girl, Johnny Mnemonic and Leprechaun in the Hood.

However, it's his very early foray into the world of films that I want to focus on in this installment of Trailer Trash.

Before Ice-T had even released a record, he began to gain notoriety as a rapper and songwriter, in large part due to his work in motion pictures. While a lot of his early 80's film work can be considered corny and laughable by today's standards and a far cry from the hardcore hip-hop that would make him a star, I can't help but admire the schlocky value of this period in Ice's career.

One of the very first things Ice-T ever did commercially was write two songs for the "educational" straight-to-video Mr. T (no relation) vehicle Be Somebody... or Be Somebody's Fool! If you haven't seen this ridiculous piece of early 80's nostalgia, I highly recommend checking it out. For almost an hour, Mr. T embarrassingly tries to teach kids life lessons through skits, songs and motivational speeches. While some of the stuff is pretty standard (respect your parents, don't do drugs, etc), some of it, like a scene featuring Mr. T hosting a fashion show, is just plain weird.

I've had people tell me they actually had to watch this in school, which I find hilarious and shocking at the same time. The original VHS (and LP soundtrack) have long since gone out of print, but bootleg DVDs abound and clips are available all over the internet.

While Ice-T doesn't actually make an appearance in the video, he did write two of the videos most memorable songs; "Treat Your Mother Right" and "I Am Somebody". Here is the latter for your viewing (and listening) pleasure:

The same year as Be Somebody... Ice-T got another break in movies. This time not only did he get to contribute to the soundtrack, but he also got an onscreen role as... you guessed it, a rapper in the 1984 dance film Breakin'.

This Golan-Globus Production (ah, Golan-Globus) was released by The Cannon Group and MGM in order to capitalize on the "urban" audience and the then-brand new and very popular fad of break dancing and along with Ice, stars Adolfo 'Shabba-Doo' Quinones, Michael 'Boogaloo Shrimp' Chambers and Lucinda Dickey, who JFD fans will remember from Ninja III: The Domination.

The movie was so popular it spawned a sequel (with the most parodied title of all time), Breakin' 2: Electric Boogaloo which also features a cameo from the Ice man.

Here's the trailer for the original Breakin'. Pull out a sheet of cardboard and see if you can still bust any of your old moves:

So, after Cannon Pictures had officially milked the break dancing craze dry with Breakin' and Breakin' 2, they set their sights on the other big "urban" trend at the time; rap music.

Keeping with their policy of neglecting the 'g' at the end of words (that's how the kids talk, right?) Cannon released Rappin' in 1985. The movie stars Mario Van Peebles, which is hilarious, because as anyone who has seen this stinker before knows, Mario Van Peebles can't rap for shit.

Fortunately, Cannon was smart enough to bring back Ice-T to write some of the music/rhymes for this movie. They also gave him a small, uncredited part in the film and most interestingly, overdubbed some of Van Peeble's piss poor rhymes with Ice's, including the film's iconic phrase "Can't stop/ Won't stop/ Climbing that mountain 'till we reach the top!"

The film was a mild success but nowhere near as popular as the Breakin' movies and signaled the end of Cannon's foray into urban street culture. Check out the trailer to see why:

Shortly after Rappin' failed to bring rap music into the popular culture, Ice-T's career exploded with the release of his albums Rhyme Pays, Power and OG: Original Gangsta and of course film roles in New Jack City, Ricochet and Trespass only elevated his status as a pop culture icon even higher.

Still, I can't help but reminisce about the more innocent times, when Ice-T was writing rhymes about respecting your mother for Mr. T to rap to children. Ah, memories.

That's all for now. Look for future installments of Trailer Trash in the upcoming weeks.