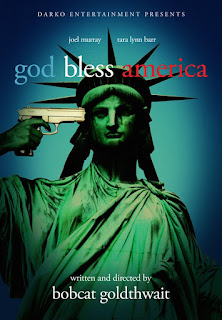 A couple weeks ago, we talked about comedian Bobcat Goldthwait's 1991 directorial debut Shakes the Clown where I revealed that I am a huge fan of Goldthwait's off-beat brand of satire that so often blurs the lines between the most absurd and tragic elements of American life.
After films about alcoholic clowns (Shakes), bestiality (Sleeping Dogs Lie) and autoerotic asphyxiation (World's Greatest Dad), what dark corner of the human psyche could Goldthwait possibly explore next? Well, how about unadulterated cold blooded murder?
In his latest film God Bless America, Goldthwait sets his lens on the most vapid and self-centered aspects of American culture and a man determined to rid the world of them, one bullet at a time.
Joel Murray (The Artist, One Crazy Summer) plays Frank, a depressed man who after finding out her has a brain tumor is on the verge of suicide. That is, until he sees a My Super Sweet 16-type reality show where a self-absorbed teenage girl named Chloe is complaining about her privileged life, which sets Frank over the edge and turns his self pity into outward rage.
When he publicly murders Chloe, he catches the eye of Roxy (Tara Lynne Barr), another teenage girl who is also frustrated by the selfish culture of modern America. The two team up and begin laying waste to all those they deem deserving of death.
While the plot sounds pretty grim, if it's anything like Goldthwait's previous films, God Bless America will also infuse quite a bit of humor and humble charm with its anarchist plot.
God Bless America hits On Demand outlets on April 6th and select theaters on May 11th.
A red band trailer for the film has just been released. Check it out!
Labels: Bobcat Goldthwait comedy God Bless America Joel Murray murder My Super Sweet 16 rampage Tara Lynne Barr Trailer violence