New Trailer for Zombie Ass: Toilet of the Dead 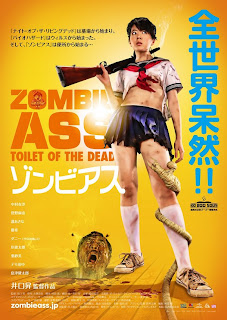 A few episodes back we told you about the latest piece of Japanese absurdity from director Noboru Iguchi (The Machine Girl, RoboGeisha, Mutant Girls Squad) impossibly titled Zonbi asu or Zombie Ass: Toilet of the Dead.

Rumor has it that the producer of the film, Tadayoshi Kubo, gave Iguchi free reign to plunge deep within the weirdest corridors of his imagination for Zombie Ass and that's exactly what he did. Not surprisingly Iguchi cast long-time muse and adult video star Asami as Megumi, a pretty, young karate student who is wracked with guilt over the suicide of her sister Ai, who was tormented by high school bullies. She accompanies a group of older friends on a trip into the woods (there's smart girl Aya, her druggie boyfriend Tak, big-boobed model Maki, and nerdy Naoi). Things start to go badly when Maki finds a parasitical worm inside a fish they catch - and wolfs it down alive, in the hope that it'll help keep her skinny! And then, the group is attacked by a crowd of poop-covered zombies (!) who emerge from an outhouse toilet. The group seeks refuge at the home of strange Dr. Tanaka and his daughter Sachi. But unbeknownst to them, Tanaka has been conducting experiments on the parasites - and the zombies! - and has another fate in mind for the five strangers from the city. What's the connection between the parasites and the undead? And can Megumi's karate alone help them escape, or will she have to rely on the liberating power of farts to save the day?

Recently a trailer has been posted online for this giant ball of gross-out perversion and fans of Iguchi's brand of lunacy will likely revel in it's over-the-topness. For everyone else, it's probably best just to steer clear.

Zombie Ass: Toilet of the Dead trailer
(NSFW, although most of the good stuff has been blocked out):