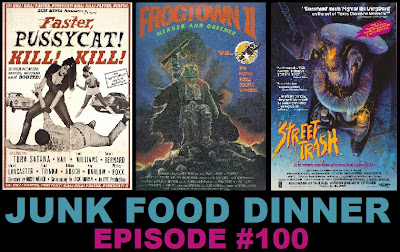 Holy shit! Can you believe it? We finally mad it to our 100th episode! And to celebrate, we're reaching deep into the vault and pulling out some of our cult favorites for our centennial podcast.

Then, we hop into the sequel of a film we talked about all the way back on the very first episode of Junk Food Dinner, Frogtown II from 1992. This follow up to Hell Comes to Frogtown picks up right where it's predecessor leaves off, only this time trading Roddy Piper for Robert Z'Dar as our protagonist Sam Hell battling an army of mutant frog soldiers in a post-apocalyptic wasteland.

And finally, we slum it with a cartoonish group of New York homeless folks who find themselves melting into brightly colored gunk after drinking bottles of cheap liquor that have been sitting in storage for years when we get splattered by Street Trash from 1987, directed by J. Michael Muro and written by Roy Frumkes.

Also, if you like the show, please take a minute and subscribe and/or comment on us on iTunes, Stitcher, Blubrry or Podfeed.net. We kill mutant frogs with your love and support. 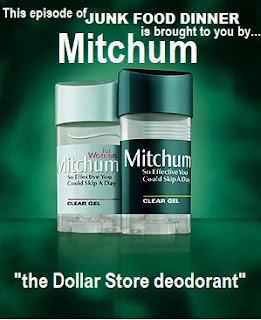