So, I've decided to watch another horror franchise and document my findings. I did this last year when I discovered that I knew almost nothing about the "Saw" movies and needed to learn to avoid "grampa" status. You can read that here. This time around, I considered "Resident Evil," but figured since it's still (somehow) going on, I should wait for that to end before trying to sit through them all. And I considered, and even momentarily committed to "Hellraiser," before realizing that I'm a little too afraid of that franchise on account of the fact that Pinhead falls into all the worst franchise tropes: He goes to space, he goes to Hell, he goes to the internet, etc.) and that sounds like too much for my ol' heart to take. 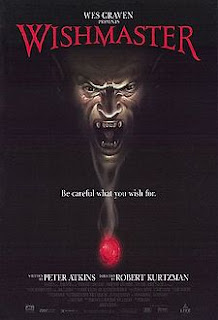 So, I settled on something that I liked when it came out, but seems comical in retrospect: "The Wishmaster." I was stoked on this movie when it hit theaters due to the commercials assuring me that it was "presented by" Wes Craven, whatever "presented by" was supposed to entail. In reading about this movie, I have found very little that actually connects Craven to this movie other than his Executive Producer credit. Though, in the documentary on the DVD, writer Peter Atkins, says he was approached by some people who wanted him to write a movie about a killer genie. I assume that was Craven. I assume that after the failures of "Shocker" and "Vampire in Brooklyn," Craven had given up on his hopes to successfully create another wise-cracking, franchise-ready Freddy-like character himself and was pawning off his ideas on others, who'd do the heavy lifting.

And that's what is at the heart of this movie. Not that that was original at the time. It seems like a lot of weirdo trash talking, magical horror monsters popped up in the 90s to try to cash in on Freddy's success as a chatty killer in a genre full of franchise slashers whose biggest lines of dialogue were deep breaths. So, a bunch of talkative little dickheads popped up in horror, like Chucky, Dr. Giggles, the Leprechaun and even Pinhead and Candyman could be lumped in, though their senses of humor were pretty dry.

This Djinn, though, falls almost right in line with Freddy as a wise-cracking, gross-faced killer with basically unlimited magical powers, provided (of course) they manage to catch you asleep or in the act of wishing for something.

ANYWAY, for the movie itself, we open up in Persia circa 1100 AD or so and the Djinn is already having a great time fucking up a courtyard full of people while trying to entice the King into making a third wish, which would allow the Djinn's gang of ghouls to come to earth and start running shit. Man, oh man, do I love a movie that starts out with a massacre. The Djinn's turning people into trees and snakes and stuff. Dudes are getting ripped up by belly monsters. It's all very "Hellraiser 3," minus the chains and lethal compact discs. Oddly, Wishmaster's writer wrote a few "Hellraiser" movies. Anyway, one dude's skeleton even walks right out of his skin like he's got an appointment to get to and starts killing other people. I love the idea of skeletons as scary monsters. There've been movies about haunted eyes, brains that wouldn't die, alien penises, tooth-filled vaginas and even a zombie buttcrack, but skeletons are really the only body part that's stood the test of time as a scary monster.

Anyway, some wizard locks The Djinn in a very pretty rock before the king can make a third wish. The Djinn's make-up effects look great. He's scary and inhuman without being so covered in crap that it covers up the great performance by Andrew Divoff (who fucking rules.) The Djinn is probably the scariest looking dude who wears Bugles on his fingertips. 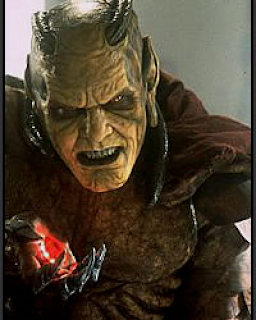 So, in the future (i.e. the present), Robert England and Ted Raimi are overseeing some people unloading freight on the docks. A comically drunk crane operator (played by Joseph Pliato from "Day of the Dead"(notice a trend?)) drops a crate on Raimi. A quick note: pretty much everyone in this movie is some awesome horror movie actor. This was fucking awesome in 1997 and I cheered every time Tony Todd or Reggie Banister showed up, but the appeal of stacking your movie with iconic actors seems to have worn off in recent years (I blame Adam Green.) Anyway, in the wreckage, a less drunk(?) dockworker finds the Djinn's stone and snags it, sells it to a pawn shop dude who sells it to a fellow named Nick Merrit, who gives it to the main character of the film, Alexandra, who then gives it to her tennis partner/friendzoned boy toy. At this point, The Djinn's stone has effectively gone through more hands than a VHS dub of "Surf II."

The friendzoned homeboy accidentally releases The Djinn, who starts off as some kind of weirdo genie fetus (played by Verne Troyer!), but gets to be an adult after killing a little bit. He then takes on a weird obsession with Alexandra, which is very confusing and vague. Alexandra didn't free the Djinn, nor was she the first person who found the stone. Oh well. Sometimes when you're a magic genie, you get to pick your own master, I guess.

What follows is The Djinn running into people and getting them to passively wish for things and then doing a Twilight Zone kind of twist granting of that wish. He meets up with Kane Hodder, playing a security guard, who says to the Djinn that "In order to see my boss, you'd have to go through me... which I'd love to see." The Djinn turns him into a glass door and walks through him. Which, of course, begs the question: what exactly is a wish? Over the course of the movie, the wishes devolve from people actually saying they WISH for things to people just kind of vaguely mentioning things they'd like in passing.

While this is going on, Alexandra has a scary nightmare, which leads us further into Freddy rip off territory. When she finally meets the Djinn (and wishes him to kill himself), he shoots himself in the had and lives through it to show off how unstoppable he is, which is another trick he must have learned at Freddy's "How to be a Magical Slasher" course at community college. Also, like Freddy, he can just be other people or be more human looking, from time to time. In fact, The Djinn has this whole human alter-ego named Nathaniel Demorest, which is a pretty fucking solid nickname for a monster.

If you're gonna watch this movie, prepare for a bunch of the shittiest, out of place jump scares in horror history. There's a scene where a student walks into a morgue and a jar full of eye balls are thrust into his (and our) face. Sure, a jar full of eyes is scary (and foreshadows the student's death), but why is the other kid walking out the front door of the morgue with those eyes? Is he just taking them home? In another scene, Alexandra is talking to an old lady about genies during rehearsals for some kind of play. During a lull in the conversation, a student wearing a scary mask pops into Alex's face (and ours) and screams "WHERE DO YOU WANT THE MASKS?!?!" or something. The level of pop-up scare subtlety in this rivals the ghost woman in "House on Haunted Hill" that was later revealed to just be a blind lady that wandered into the house.

Everything cimaxes at a never-mentioned-until-the-third-act party at Simon Beaumont's (Robert Englund) house that all the main characters have been invited to, even the ones who never met Simon in the previous 70 minutes! We get to relive the opening scene massacre, as Simon wistfully mentions a vague desire to have a party that people would remember.

Sadly, for this massacre (and a lot of other effects-heavy scenes in this movie), things look confusing. Practical effects in 1997 were pretty top notch, and the movie was directed by fx guru Robert Kurtzman, which no doubt helped things on that end, so the practical effects in this flick are pretty badass. A practical fx man overseeing an fx movie in a great time for practical fx, and it turns out better than you'd probably assume. HOWEVER, while 1997 was a great time for practical fx, it was a fucking abysmal time for cgi fx and there's a whole lot of that. And, as you might expect, it all looks pretty horrible. So, in these massacre scenes, you alternate quickly between "Oh man! That dude is getting decapitated by piano strings! How gruesome!" and "Ew, man... that girl turned into glass and exploded. Looks like something from the 'Hercules' tv show. Yuck."

Producer: Hey. I just saw a special on the History Channel about Jack the Ripper. Put him in the movie.
Robert Kurtzman: But this movie is about an evil genie. That would not make sense.
Producer: I sure can't wait to see that Jack the Ripper in your movie.... (walks away).

Amidst all this chaos, Alex must make her final, world-destroying wish, or watch her little sister die in a painting fire. You know, you can really feel the emotion in a scene when, rather than using the real actors, you use paintings of them. Though, in this movie, that may not be that bad. Tammy Lauren, who plays Alex, is just awful. She has some classically bad line readings in some of the times she tells the Djinn to fuck himself or calls him a son of a bitch. All her "acting" is so painfully straight out of a VHS "How to Act" tape. Everything she does makes me think "Oh, yeah. They taught that trick on episode 5 of VH1's "Scream Queens," I remember that one."

Anyway, in traditional Wes Craven fashion, this movie ends with the protagonist wishing it all away. Alex's "I wish this never happened!" is the same, lame ass ending that we got when Nancy told Freddy that she wasn't afraid of him and he turned into light and faded away. On the bright side, though, wishing a genie away makes more sense than just turning your back on a dude with a razor hand who killed all your friends and hoping for the best.

As much as I rail on this movie, I love it. I won a Wishmaster shirt at the very first Horrorama in my hometown and I revisit this one from time to time. It's fun, Andrew Divoff as the Djinn is just great. The way he says "Wishez" makes me wanna be his friend so that I can be like "Hey, Andrew Divoff. You want a soda?" and he'd be all "Sure, Parker. Gotta stay refreshed while we're watching Julian Sands movies and making fun of 'Blood Lake.'" and I'd be all "As you wish!!!" and we'd laugh and laugh and then hug. The cameos are great, too. If you wanna make a drinking game out of spotting all the horror icons, you'd probably be wasted by the time you got to Tony Todd. And, of course, the effects. If you're into practical effects, see this movie right now.