"Wishmaster 2: Evil Never Dies" picks up right where the first one ends. Well, sort of. Not really. The statue of Ahura Mazda (that contained a red gem (that contained the titular Djinn)) is no longer owned by Robert Englund's Simon Beaumont character, as it's now in a museum. In the previous film, Beaumont was pretty adamant about getting this piece to complete his collection of weird old statues of gods (Ahura Mazda was the Persian God of Sweet Beards), but I guess in between that movie and this one he got bored of looking at the damn thing and gave it away to the cheapest looking museum in Los Angeles.

Looking cheap doesn't stop some thieves from trying to loot the place, but I guess crummy museums attract crummy thieves and only one thief survives and escapes: a foxy late '90s goth/punk sorta broad named Morgana (the most popular name for goth/punk broads back in those days), played by Holly Fields. Somewhere in the chaos, someone shoots the Ahura Mazda statue, freeing the Djinn. Well, to say the Djinn gets "free" doesn't do it justice. The gem ejaculates Djinn jizm on a wall and The Wishmaster kinda gets born out of a newly formed wall vagina. He's born as kind of a weird larva crab thing. It's pretty educational, really. 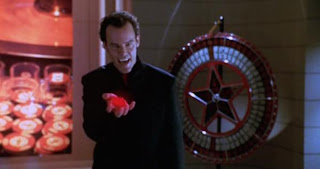 The Djinn starts the film out by showing us that he's been playing a lot of "Mortal Kombat III," as he turns someone into a foetus because they wish they'd never been born (Babality) and then he turns someone into an ice cube like he's goddamn Sub-Zero. The ice kill continues the original's trend of The Djinn's devolution from granting wishes to granting vague imperitive statements. The aforementioned frozen guy was a cop who chose his words wisely when advising The Wishmaster to "Freeze." Get it?

So, The Djinn takes his human form of Nathaniel Demerest and gets arrested, tried, and put in prison in the span of about 4 hours. How do you put a guy on trial who technically doesn't exist, or more accurately, is dead (as the Djinn stole his human face from a corpse in the previous film)? Who cares? Like I said, the whole process is over in about 50 frames, so it doesn't matter too much. Turns out, it's the Djinn's plan to go to prison cuz he needs to prey on the inmates so he can grant 1,000 wishes, gain 1,000 souls and THEN get Morgana to make 3 wishes so that he can open the door for his crew of Djinn homeboys to take over the world. I guess his plan failed in part one because he forgot about this whole 1,000 souls thing.

The guy who wrote and directed this installment is the pervert responsible for "Nightmare on Elm Street 2*" so, as you can imagine, I was expecting a lot of shower rape and authority figures practicing S&M in these prisons scenes. But, aside from a scene where a guy's body folds in half so he can fuck himself in the ass, these scenes are all pretty standard stuff. (SPIT TAKE!!) A guy's body folds up and fucks itself!?

Meanwhile, despite her best efforts, Morgana is pulled into the plot. How? I'll give you some hints. It's not good screen-writing, it's not because her character is so interesting she has no choice but be the focus. Answer: Some Freddy-esque dream sequences! In fact, Morgana's not the focus of this movie at all, or at least not until the third act. This movie, perhaps learning a lesson from almost 20 years of franchise horror killers to this point, makes it a great point that The Wishmaster is the star and as such, he gets not only the best lines, but the most screen time. Also, when you have the completely awesome, scene stealing Andrew Divoff as your killer, it's probably hard to justify filming anyone else.

Speaking of people who aren't Andrew Divoff, they've done away with the One Horror Movie Icon Per Minute Cameo thing from the last one, but Tiny Lister and Bokeem Woodbine show up for a second, so that's something. And there's a priest that looks like a younger, scrawnier Kevin Nash.

Despite the fact that Djinns and genies have nothing to do with Christian mythology, things get seriously Catholic. In some boring scenes that are Djinn-free, Morgana learns that to beat the Djinn, she has to become "pure." This means returning stolen goods, taking out her piercings, getting a new wardrobe and cutting off one of her fingers. I'm no theologian, but this hardly seems logical or reasonable. Oh, well. Later on, everyone goes to Hell, Morgana's priest friend gets crucified and Demerest tells everyone in prison he's The Devil (which is obviously metal). While Morgana's getting "pure," the Djinn gets mixed up with the Russian mob and takes over a casino in Las Vegas (he must have seen "Leprechaun 3" while in the slammer). 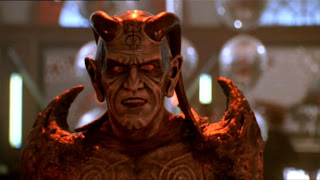 The Djinn gets the rest of his 1,000 souls by assuming that everyone playing a nickel slot machine in Vegas is actively "wishing" for a jackpot, rather than just passively looking at pretty lights while waiting for death. Things culminate in a really cheap attempt at recreating the bad-ass party massacre from the original film (this is straight-to-video, afterall). With the drop in budget, instead of skeletons tearing themselves out of bodies and people turning into trees, we get a card shooter that shoots out cards really, really quickly and it kills people. Also, there's a roulette wheel with spikes. As you can imagine, this scene fucking sucks. Also, due to the lack of budget, The Djinn, in Djinn form, looks like a bag of shit. The make up and design take a serious turn for the worse. They gave the genie a bunch more spikes and some shitty tribal tattoos amd bigger muscles. His head no longer has those cool horns that wriggle around. I also think they gave him a lazy eye for some reason.

Anyway, Morgana's clever wish to stop The Djinn at the end helps her become more "pure," which allows her to speak some magic Persian words that put the Djinn back in his red stone. Unlike the previous movie, Morgana doesn't make a wish that undoes everything that's happened in the film, she just wishes the Djinn to go to his stone prison,** yet everything the Djinn has done gets undone anyway, because that's how these movies go, I guess. Unlike Jason or Chucky or someone, if you beat the Djinn, all your friends get to come back to life, even if you didn't wish for that.

Anyway, this movie is a lot cheaper and a lot dumber than the previous one. But, on the other hand, there's a lot more Divoff and some pretty wacky wish/kills (check out the guy who wants to "walk right out of jail"!) so it's worth watching. But, don't expect a whole lot from the scenes where Andrew Divoff isn't there. Check this movie out if that's what you wish! LOL!! 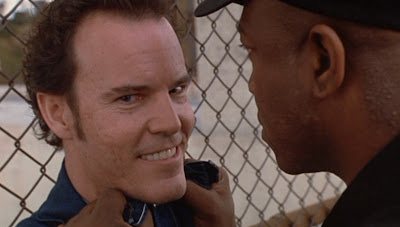