Trailers that are relevant to Parker's interests and/or life! 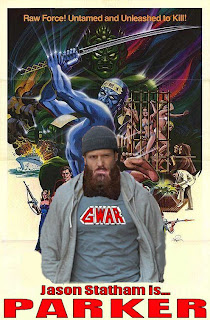 A few trailers came out this week that are really geared for me, Parker. The first I wanna show you is entitled "Parker." We talked about this movie on the show a while back in its embryo phase, I think, and it tickled me pink. It concerns a man named Parker played by international tough guy Jason Statham and part of it was filmed in my home state of Ohio, so clearly it's loosely based on my life.

Anyway, this looks like some ol' usual Jason Statham stuff, which is to say: awesome. Clifton Collins (Rules of Attraction, The Stoned Age) is apparently in it too, which is awesome cuz he rules and the trailer teases a that we may see Jennifer Lopez's butt, which is the best part of Jennifer Lopez, so everything seems to be adding up nicely here.

In other (probably better) trailer news, the new Bret Easton Ellis creation "The Canyons," has a trailer. This flick is going straight to Netflix because that's how things will be in the future and it seems cool. If you didn't learn it from our Bret Easton Ellis theme show, I fucking love everything this dude does*, so I'm totally into this. Admittedly, the casting of Lindsey Lohan seems more like a cry for attention than anything else, but what are you gonna do? Here's the (super cool) trailer:

*Except some of "The Informers."