I have to admit that I didn't see nearly as many newly released films in 2012 compared to previous years. For some reason or another, I was much more content to spend most evenings this year huddled around my VCR or AppleTV, alternating between classic films and cult movies. When I did venture outside of my apartment to watch movies, it was usually towards a repertory cinema like the New Beverly, American Cinematheque, or Cinefamily, which rarely show first-run pictures. This hermit-like existence was likely spawned by my dwindling patience with the average moviegoer at the big cineplexes these days, with all the texting and talking and general idiocy, as much as it was by the declining quality of the average Hollywood film, as the ailing studio systems works to eliminate all risk-taking from its films and attempts to develop the perfectly non-offensive, broadly appealing international blockbuster, even if the result is as bland as a bucket of lard. All of that said, I did see some (mostly mainstream) new movies this year and here are the ten I enjoyed most. 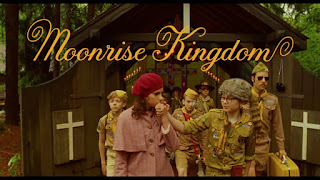 Moonrise Kingdom
Wes Anderson films are almost not worth discussing as a large part of the enjoyment of them derives from an appreciation of his filmmaking style, which seems to be among the most divisive of any directors now working. For a fan like myself, who enjoyed all of Anderson's work to date (perhaps with an asterisk next to DARJEELING LIMITED), this film was another significant triumph. Even for those who can't stand his quirky-to-a-fault characters, unrealistically over-designed settings, and precise geometric framing, Moonrise Kingdom surely proves that Anderson is one of the most consistent directors working today, continually making films exactly as he sees fit with very little if any compromise or conformity to current trends in filmmaking.

Looper
Rian Johnson's previous two films, BRICK and THE BROTHERS BLOOM, were enjoyable, smaller films that showcased an extremely promising young writer/director with a strong visual sense and a knack for crafting detailed characters. With LOOPER, Johnson's third film, the promise has been delivered on (and then some). With a frenetic blend of action and science fiction, a particularly twisted chronology, and one of the most memorable villains in recent memory, this was a thrill to watch. Time travel films are often up my alley, with Shane Carruth's PRIMER topping my personal list - although that may not last for long. When watching this film, particularly towards the end, I kept thinking to myself that this is probably one of those films that gets even better on subsequent passes. I don't plan on waiting very long before validating that theory.

The Raid: Redemption
I often lament the fact that kung fu cinema is virtually dead. Yeah, this year saw the release of THE MAN WITH THE IRON FISTS (a real mess), and you have some of the older stars like Jackie Chan, Jet Li, and Donnie Yen continuing to release films - but these are mostly just Chinese historical epics with some wuxia and kung fu thrown in to appease younger male audiences. What little kung fu can be found these days is often increasingly reliant on wire work, computer graphics, or is just not particularly well-executed or believable. Outside of Tony Jaa, there have been very few legitimately skilled martial artists making good films in the past few decades. As such, the buzz around THE RAID: REDEMPTION caused me a fair bit of excitement, but also some trepidation. Knowing how low the bar has been set for martial arts films, I was concerned that the hype would be unjustified. All fears were completely unfounded - this is one of the most ass-kicking experiences you can have watching a film. The phase "non-stop action" has never been more appropriately applied to a film. Director Gareth Evans's makes extremely good use of star Iko Uwais's clear mastery of his martial arts disciple. The combination of hand-to-hand fighting and gunplay, set against a John Carpenter-esque siege film plot, make for a sweat-inducing good time. And while the style of combat in this film (Indonesia's pencak silat) is not particularly showy, it more than makes up for it in lethal brutality. 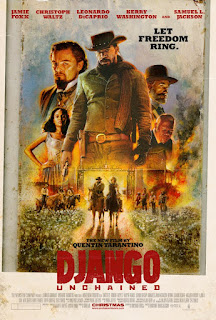 Django Unchained
For me, this was another example of Tarantino doing what he does and doing it as well as he ever has. Who would have expected that the funniest movie of the year would be a spaghetti western about slavery? Likely nobody, and certainly not myself. Besides the unexpected comedy, this film boasts another remarkable performance by Christolph Waltz, an endearingly off-beat characterization from Leonardo di Caprio, and some expertly crafted action sequences. Although not as epic or layered as INGLOURIOUS BASTERDS, there are more than enough laughs here to make up for it. It's not flawless, and Tarantino's appearance in a minor role is both indulgent and distracting, but the same point could be made for nearly all of his films.

Jiro Dreams of Sushi
As someone who doesn't even eat seafood (and who has a particular dislike and distrust for raw fish), I didn't expect a documentary about sushi to become one of my favorite films of the year. But then, JIRO DREAMS OF SUSHI is really only concerned with sushi on the surface - at its core, this is an exploration of the concepts of family and profession captured via one of the most extreme examples of a hard-working individual you are likely to witness. At times funny, at times sad, and revealing from start to finish, this is a documentary that should appeal to nearly anyone.

Samsara
Ron Fricke's first film in 20 years is a follow-up to his most recent, 1992's non-verbal, non-narrative documentary BARAKA, at the time considered both a major technical triumph for its use of time-lapse photography and large-format (65mm) cinematography and also a major artistic triumph for its explorations of mystical themes without the use of dialogue. After traveling the world for five years with a tiny production team of only five people, Fricke has reproduced the magic of his previous efforts. Similar to BARAKA, the music of Michael Stearns guides the viewer through an artfully crafted montage of the highest-quality cinematography possible, chronicling locations around the world both natural and man-made, including the mystical traditions of ancient peoples, allowing the viewer to meditate on themes of life and death. If this sounds like new-age bullshit, well - I understand. However, even if the thematic explorations here are not of interest, the superb cinematography combined with the fact that Fricke and his small team captured so many places and traditions that have never been filmed before should compel you to watch it. 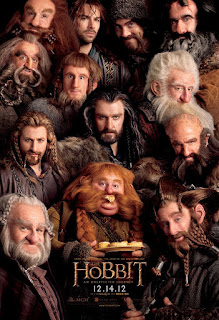 The Hobbit: An Unexpected Journey
Everyone in the world is likely to see this film at some point or another, and this probably would have likely been true regardless of its own merits, just based on the enormous success that Peter Jackson's LORD OF THE RINGS trilogy enjoyed. Despite the surefire success of this film commercially, it had quite a few marks against it creatively before it even opened: original director Guillermo del Toro dropping out, several scheduling delays before production could start, a number of incidents during production including a massive studio fire, bad word of mouth on the new 48fps digital technology, combined with the questionable decision to stretch the 300-page children's book into three films (the same number of films used to tell the epic tale of the 1,571-page LOTR trilogy - not to mention the fact that historically all film prequels have been crummy. With all of these factors stacked against it, I was preparing to be massively disappointed, particularly as a fan of the first trilogy. It may have been somewhat due to these low expectations (it's difficult to discern without multiple viewings), but I found the first of Jackson's new trilogy surprisingly enjoyable. Although it did drag slightly in a few places, and it lacked the overall diversity of settings and characters shown in the original trilogy, it did deliver a vision of Middle-Earth that was consistent with the universe Jackson had created in the those originals; compare that with the vastly different feel of the universe in the original Star Wars trilogy and what Lucas created for the prequels. And more than anything, it just felt nice to spend some more time in that world. Based on his success here, I wouldn't mind seeing Jackson attempt to recreate the magic of MEET THE FEEBLES, BAD TASTE, or DEAD ALIVE. He might even be more successful than Sam Raimi's recent attempts to do the same.

Hara-Kiri: Death of a Samurai
I've yet to see Masaki Kobayashi's 1962 original, though I've heard from multiple sources it's an overall better film. That said, Takashi Miike's remake is a solid if ultimately depressing examination of masculinity, family, and Japanese values. While not an entertaining film in the way something like 13 ASSASSINS or ICHI THE KILLER were, I responded to the strong performances here and Miike's willingness to be unrelenting in his portrayal of despair.

Wreck-It Ralph
Disney has been on something of a turn-around lately, somehow producing fun, original films (this film, TANGLED, BOLT) while Pixar has been producing either slight misfires (BRAVE) or just jumping on the sequel bandwagon and cranking out ultimately inferior (CARS 2, and the upcoming sequels for MONSTERS INC. and FINDING NEMO) films - something that would have been inconceivable to most animation fans just a few years ago. In my mind, Wreck-It Ralph was somewhat of a risk for Disney; handing the checkbook to Simpsons/Futurama director Rich Moore for his first feature film, and basing it largely on the 8-bit videogame nostalgia that has gripped the now 30-ish Children of the 80s (myself included). But this isn't typically the target market for a Disney release, and Sarah Silverman isn't typically Disney's first choice for a young female lead. Somehow the risk paid off, and Disney produced something that's a bit more than just a retro cash-in. Fun cameos from the casts of Q-Bert, Street Fighter II, and the Mario series keep things interesting and the animation is top-notch as to be expected.

Frankenweenie
Tim Burton is the classic example of a filmmaker drifting away from everything that once made him interesting. Instead of the quirky, handmade quality that made films like Beetlejuice, Pee-wee's Big Adventure, and Edward Scissorhands so much fun, he drifted towards overblown, over-serious, CGI-laden dreck. Thankfully, he has shown at least a momentary lapse in his modern style for Frankenweenie - which is appropriate, as this is based on one of his earliest short films (ironically, Disney fired the 26-years-young Burton after he completed the original short film, saying it was unreleasable and that he had wasted company resources). This stop-motion film is an easy, enjoyable throwback to 1950s monster movies and the handmade art style is endearing. There is nothing mind-blowing or groundbreaking, but it's likable enough for any fan of the Universal Monsters to check out.

Sean Byron is stand-up guy and friend of the show. He recently guest-hosted on JFD139.

We'll be posting our own Top 10 lists later this week.