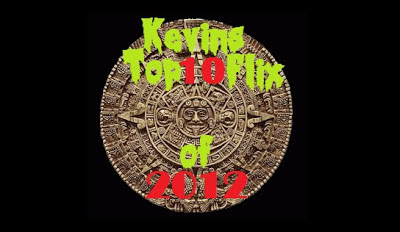 I saw ParaNorman at the drive-in at the tail-end of Summer 2012. I had seen Laika Entertainment's other stop-motion marvel Coraline a few years back and enjoyed it. But I was surprised at how much I liked ParaNorman. A very fun, nostalgic romp to get you into the Halloween spirit. Good voice work, cool soundtrack, and most of all, very impressive stop-motion animation and sets. Between this and Frankenweenie, it was a great year for spooky stop-motion in the theater.

9. Moonrise Kingdom
Wes Anderson returns with maybe his most Wes Anderson-y movie yet. If you dug the dry, quirky, 60's-inpired vibe of Anderson's previous work (especially Royal Tennenbaums), you'll get into this tale of young love and adventure. Hardened cult or horror fans may gag at the preciousness of Anderson's style, but with a great cast and cool soundtrack, I found this to be very enjoyable.

Legendary director William Friedkin serves up some sleazy Texas noir with the help of a cool story (based on the play by Tracy Letts) and good performances by Matthew McConaughey, Emile Hirsch, Juno Temple, Gina Gershon, and Thomas Haden Church. Lots of uncomfortable moments in this well-paced and unique crime thriller. Certainly not for everyone, but those willing to get lost in the gritty hillbilly reality of this movie will leave feeling dirty and satisfied.
7. Dear God No! / Father's Day

This wouldn't be a Junk Food film list without some low-budget trash cinema in the mix. Two excellent examples of sleaze-ball films with small budgets but no shortage of bad taste are Dear God No! and Father's Day which both showed theatrically last year. Dear God No! is a throw back to biker exploitation films of the 60's, with a bit of 70's rape/revenge and bigfoot movies thrown in for good measure. The Troma-produced Father's Day is the brainchild of the film-making collective Astron 6 and is about a father-raping serial killer and the group of weirdos out to stop him. Both are fun, grimy retro slime that are worth checking out.
6. Searching for Sugar Man

The documentary Searching for Sugar Man chronicles the brief career and legacy of cult Detroit rock/folk musician Sixto Rodriguez (better know simply as Rodriguez). After recording two masterful, yet low-selling LPs, Rodriguez vanished into obscurity. Unbeknownst to himself, he had become hugely popular in South Africa. I have been a big fan of Rodriguez's for a long time and am psyched his music will now get some of the attention it deserves and think this touching flick is a must watch for rock doc fans.

Another documentary, Jiro Dreams of Sushi tells the tale of Jiro Ono, the 85-year-old sushi master who operates his world class restaurant inside the Japanese subway. Besides some hunger-inducing footage of the man at work, the movie also explores Jiro's relationship with his two sons, who are also sushi chefs, and the pressure they feel to live up to their father's greatness. Even if you don't dig on sushi, this may be the best documentary of 2012 and is well worth your time.

4. The Cabin in the Woods

Joss Whedon's much-delayed The Cabin in the Woods was far and away the best horror movie to come out in 2012 (that I saw, anyway). Originally shot in 2009 with a budget of $30 million, this clever send up of classic horror tropes and mythology was tons of fun, mostly due in part to Richard Jenkins and Bradley Whitford who kick SO much ass as the "architects" as they direct the carnage that ensues. Much like last year's Tucker & Dale, I think this smart horror-comedy will only continue to gain loyal cult fans as people eventually get exposed to it on cable and DVD. If you missed this in the theater, shame on you, but definitely seek it out.

The eagerly anticipated new film by Quentin Tarantino hit theaters late in 2012 on Christmas day. I was able to break away from family functions long enough to catch it on its opening day and thought it was a fucking blast. I'll admit, I unabashedly enjoy pretty much everything QT puts out, but I still was impressed by how gripped by the story I was and how good the cinematography looked. Sure, it's longer than it needs to be and the brief appearances of Jonah Hill and Tarantino himself suck big time, but the bulk of the movie is very well done and a hell of a lot of fun. Outstanding performances by Jamie Foxx, Christoph Waltz, Samuel L. Jackson and 38-year-old child actor Leonardo DiCaprio. Oh, and if you're one of these people who are opposed to this movie because you think it makes light of slavery; lighten the fuck up, will ya.

The Norwegian crime thriller Hodejegerne was released in 2011 in its native land but hit US screens in Spring 2012. I caught this in the theater without reading or seeing much about about it and was blown away by how tense and engaging it was. Beautiful direction by Morten Tyldum and outstanding performances by Aksel Hennie, Nikolaj Coster-Waldau and Eivind Sander give this the feeling of a super-intense Scandinavian Cohen Brother's movie. Highly entertaining from beginning to end thanks to a compelling story based on Jo Nesbø's novel of the same name. If you liked original Girl with the Dragon Tattoo movies, definitely see this before the impending American re-make.
1. The Raid: Redemption

The Indonesian action flick The Raid: Redemption (AKA: Serbuan Maut) came to US shores in March of 2012 without much hype or publicity and went in and out of theaters fairly quickly. It's made back its measly 1.1 million dollar budget, but I'm still disappointment that more people didn't get a chance to see The Raid on the big screen, as it is one of the best action movies to come along in a long effing time. I was fortunate enough to catch this in it's brief run in my local cinema and, like most people who have seen it, I was amazed by its over-the-top violence, outstanding fight choreography and insane stunt work. The fairly simple plot of a team of cops raiding ruthless gangster run apartment block isn't totally unique (in fact the surprisingly fun Dredd used basically the same idea this year as well), but it is so masterfully executed and fun there's no need for complex story lines or character arcs, just action... and action done RIGHT. All three key action elements are delivered in spades; gun play, martial arts and explosions. Absolutely bananas from start to finish, The Raid is pure fun. Watch it on the biggest screen and the loudest speakers you can find.
Labels: Cabin In The Woods Dear God No Django Unchained Father's Day Headhunters Jiro Dreams of Sushi Killer Joe Moonrise Kingdom ParaNorman Searching for Sugar Man The Raid Top Movies of 2012