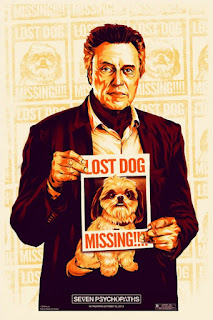 1. Seven Psychopaths
More than a meta-concept, this film became a brilliant treatise on where we've come in film development and film culture. Without giving too much away, truly more than I expected and a must see for any film geek.

2. Moonrise Kingdom
The film starts in Wes Anderson's typical dollhouse, but then explores the great outdoors in a move away from even the cute diorama of the sub in Life Aquatic. Influences on his sleeve, Anderson provides a perfect vision for any romantic who wanted to find love and a life better than those of tire adults.

3. Killer Joe
Taken from the stage and thrust onto the screen, the story of murder and double-crosses should remain clear but is consistently distressing in how unnerving and confrontational the performances are. McConaughey gives what is maybe his most brilliant performance of the year, if he hadn't already done so in Magic Mike, Bernie, Paperboy, etc., etc.

4. Bernie
Linklater goes back to Texas for some folksy dark comedy. By having actors local to the scene of a bizarre murder, he let's the town speak for itself, more or less. Thankfully, this dark movie about murder in "flyover country" doesn't encroach on Coen Bros and remains wholly unique. Jack Black is amazing as the titular character - a murderer who a town finds too sweet and loves too much to convict.

5. Compliance
There are cringe-worthy films, and then there is Compliance. Probably the most depressing movie since Dogville, what prevented me from slicing my wrists was the very real resolution to examine human nature, and the realization that the actors, including Dreama Walker from Beware the B----- and Ann Dowd, from mostly stage and various TV, act their asses off. Note: if you are from the midwest, you will feel ashamed of that fact after watching the film and learning that this film is based on very real events.

6. Cabin in the Woods
A visually entertaining commentary on horror films today. Many dismissed the film as a nod-and-wink to horror fans, which is unfortunate as it has volumes to say about the corner into which mainstream horror films and production companies have painted themselves. Yes, there are references to classic horror films, but they exist *to set the debate,* and the debate is worth multiple viewings.

7. Klown
Absurd, Curb-Your-Enthusiasm-styled humor from Denmark. The movie goes beyond any cringe-worthy film scenarios, proving that there are highly uncomfortable and hilarious places yet to uncover. Examples: What to do when your friend is having sex next to you in the same bed, How to take your relationship to the next level with a pearl necklace, and what will you do while on weed and booze at music festival in your underwear? 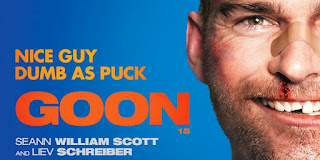 8. Goon
Shamefully overlooked hockey-comedy with a great comedic performance from Sean William Scott and another great but small performance from Liev Schreiber. Scott's character is kind of dense, but extremely likable and even engaging. The film isn't doing much more than an underdog story, but it's probably the most likable underdog story since Rocky (I), except with loads more humor thanks to the cast and dialogue.

9. The Avengers
So what if Hulk goes nuts on the hover-ship? That's your beef? THAT'S why you "can't" like the movie?? You're really going to nitpick the most visually coherent and stunning superhero film to ever exist THAT ALSO pays attention to comic book canon? After decades of movies not giving a single thought to the comic book community outside of marketing, they finally manage five carefully crafted movies to set up a single spectacular and magnificent superhero crossover, and it's just not good enough for you, is it?! Well, great news, Jack: there's an atrocious Captain America/Spiderman/El Santo crossover from 1970s turkey called "3 Dev Adam" that's way more suited for your demanding comic book devotion or your belly-aching for "logic" and "realism" in COMIC BOOK-inspired movies. How's that sound, junior? You want to watch a foreign rip off, or maybe that '71 Captain America movie? Or the 1990 Captain America movie? No, no- Captain America: THE FIRST AVENGER, is off limits, sir, because it's not good enough!! IS THAT WHAT YOU WANT, BIG GUY, WHEN THE AVENGERS AND JOSS WHEDON AREN'T GOOD ENOUGH?? CAN WE JUST BRING YOU THE WORST SUPERHERO MOVIES ON A SILVER PLATTER, SIRRRRRRR???? So, yeah, in short: try not to slap anyone who claims The Avengers is not the most successful superhero film we've ever been blessed to see.

10. Thankskilling 3
More than a meta-concept, this film became a brilliant treatise on where we've come in film development and film culture. Without giving too much away, this one is truly more than I expected and a must see for any film geek. 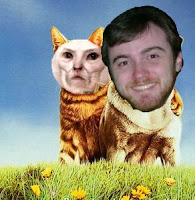 Jason "Razorblades" Frisbie is the co-host of Pool Party Radio. He has guested on JFD quite a many times, he lived in Japan once and he totally likes David Bowie. In the future, he will change American culture by implementing A Frisbie's Right to Choose.

We'll be posting more Top Movies of 2012 lists in the next week from some friends of the show and we'll be posting our own lists after our year-in-review episode goes up Wednesday.