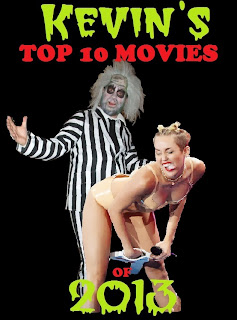 2013 was a strange year at the movies for me. Most of the Hollywood blockbusters that I saw were technically impressive but failed to get me too excited otherwise (Pacific Rim, Gravity). The indie/art house scene offered a few surprises (Her, Inside Llewyn Davis) but not a lot for fans of genre film making to latch onto. American Hustle, Dallas Buyer's Club and The Wolf of Wall Street are all well and good, I suppose, but I'm a cult movie fan, goddammit! I need something with a little more panache.  And to make matters worse, the horror genre didn't exactly have a banner year either, continuing on their never-ending quest to remake everything. Some were alright (Maniac), but most completely unnecessary (Evil Dead, Carrie). The films I liked the most this year seemed to be the most divisive among viewers. A lot of the movies on my list are love 'em or hate 'em kind of flicks. They're weird, confrontational, unconventional and certainly not for everyone. But for me, these where the ones that I had the most fun watching in 2013.

Ironically, one of the best horror movies of the year is technically from 2011. However, when You're Next finally landed in US cinemas in August of 2013, it was a welcome change of pace. Sure, it's not the most original plot (home invasion with twists you can see a mile away) but at least it's not a fucking remake. And you probably won't recognize any of the actors in it (except for maybe Re-Animator's Barbara Crampton). Nevertheless, Adam Wingard does a good job of creating tension and action and keeps the pace going throughout the film. And I'll be damned if the three animal-masked killers don't look cool as hell. Mix that with some good gore and some genuinely goofy moments and I thought it was probably the best straight horror film in theaters this year.

Chances are you probably didn't get a chance to see Mold! in the theater this year. Neither did I. And that's a shame because Mold! is exactly the kind of movie that is so much fun to see in a theater or drive-in environment, but because of it's size and budget will never get a wide release. Nevertheless, fans of old school low-budget horror and sci-fi should still have a lot of fun with this one on DVD. Director Neil Meschino is obviously a fan of the genre tropes he is paying homage to/parodying and there's tons of slimey practical effects and gore to keep fans of junk cinema entertained. As with any ulta-low budget movie, don't expect amazing acting or flawless photography, but I think Mold! makes up for it with plenty of cheesy insanity.

Since the success of The Blair Witch Project, the goal of any found footage horror film is to make you believe that what your are watching is real. However, most found footage films are clearly staged and the viewer never once has the illusion of watching actual amateur video of strange or horrific events. The WNUF Halloween Special not only succeeds in fooling the average viewer that what they are watching could be real but also taps into childhood Halloween nostalgia for those of us who grew up in the 1980's. Presented as an actual Halloween special that aired on a local TV station in 1987 and shows supernatural events happening live on air, the 'movie' features believable segments and impossibly authentic looking commercials and bumpers. Even after you learn that it was all manufactured, it's still a great tribute to 80's TV and one I will be watching annually around Halloween time.

2013 was the year of the apocalyptic movie. It seemed liked every month there was a new movie in theaters that took place during or after the end of the world. While that sounds great, most of them weren't worth the price of admission. There were even two end of the world buddy comedies this year, This is the End starring Seth Rogen and his posse and The World's End starring Simon Pegg and his posse. I opted to see This is the End in theaters, expected The World's End to be a stale retread of Shawn of the Dead. I made the wrong choice. The World's End is a brilliantly funny film about holding onto the past too long and the way friendships change over time. Not to mention it has some wonderfully culty sci-fi elements to boot.  Pair that with some great performances and cool special effects and you have a movie that is a lot of fun and instantly re-watchable. 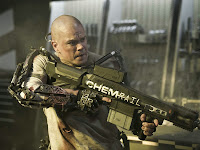 As far as science fiction/action is concerned, Neil Blomkamp, in my opinion, is the #1 new director to keep up with. I thought District 9 was an exciting breath of fresh air to the increasingly stagnant world of sci-fi and I couldn't wait to see what he'd do next. While I don't think Elysium is as strong as District 9, I still think it is a very well made, well paced and original movie. The setting is futuristic but believable. You're able to root for Matt Damon as he tries to illegally break into Elysium, a private satellite planet where the rich live peaceful, disease-free lives while the poor toil away on Earth (although, I would have been interested in seeing Blomkamp's original choice of Eminem in the role). The action is plentiful and the pacing is quick. Cool special effects and another great (although very different from District 9) performance from Sharlto Copley made for an exciting watch on the big screen.

C'mon! How could a horror-comedy about an anxious suburbanite whose stress manifests itself in the form of a Frank Hennenlotter-esque monster puppet that lives in his ass and kills people get any more intriguing for a goofball like me? Oh, I don't know, how about having it star my favorite cast member of The State and all around hilarious dude Ken Marino! Needless to say, expectations were high going into Bad Milo, and it delivers on its promise of quirky, funny and highly entertaining comedy. The performances were good and the practical work on the Milo puppet was a welcomed  throwback to the ridiculous monster puppets of the video store era. I did think it was a bit light on the horror end and lacked a lot of the crazy over-the-top gore I had hoped for, but it certainly wasn't enough to keep me from thoroughly enjoying this delightfully goofy movie. I mean, just look at that fucking poster!

I went into The Rambler not knowing much about it. It was recommended to me by a friend and I just assumed it would be some kind of road movie or crime thriller. What I didn't expect was how weird and David Lynch-ian this movie would be... and for that matter, once the movie took these strange, disjointed turns, I didn't expect to like it as much as I did. Dermot Mulroney plays the titular rambler who after been released from prison, quickly becomes fed up with his cheating wife and shitty job and takes off hitchhiking across the country to work on his brother's farm. Fairly straight forward so far. But what he encounters on the road can only be described as surreal. Wacky characters who drift inexplicably in and out of the story, unconventional editing and a stylish atmosphere all add to the dream like qualities that truly make The Rambler's journey "a trip". Mulroney does a good job of playing the strong silent type, who embraces every strange twist and turn without a lot of commentary or emotion. I suggest viewers take Mulroney's lead and just sit back and take in the weirdness.

Speaking of trippy flicks, The Congress was another film I saw without a lot of prior knowledge. All I knew is that it was directed by Ari Folman (Waltz with Bashir) and that it mixed live-action and animation. The story centers around Robin Wright, who is playing herself, and is not sure whether or not to accept an offer from a major motion picture studio and her agent (Harvey Keitel) to have her image and personality scanned into a computer to be used however the studio wishes in the future. Then we travel 20 years into the future, where now that same movie studio and major corporations are now using chemicals to basically put the populace in never-ending customized acid trips. This part of the story is done through animation, and looks outstanding. The story is far fetched but believable at the same time. There are great performances by Wright and Keitel as well as Paul Giamatti and John Hamm (the latter only appears in animated form). As a fan of cult animation like Ralph Bakshi and Heavy Metal, I am so glad to see that there is still smart, adult-oriented, drug-friendly, 2D animation being made in 2013. 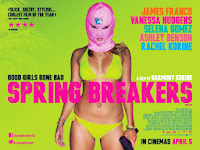 Between Miley Cyrus's transformation into a drug using sex pot and Selena Gomez's turn as a bikini-clad partier in Spring Breakers, 2013 seemed to be the year of former Disney good girls going bad. I saw Spring Breakers in the theater in early 2013 and enjoyed it's colorful off kilter portrayal of a group of bored teenage girls who turn to crime to fund their spring break trip to Florida. However, it wasn't until subsequent viewings on blu-ray that I truly appreciated the film for how genuinely insane and beautiful it really is. James Franco is great as the wannabe gangster who shepherds the girls through their descent into the seedy crime world of the F-L-A. While I enjoyed Harmony Korine's writing on Kids, I wasn't a big fan of his post-Kids work, but I feel that Spring Breakers's silicious neon-coated world  is probably his best work to date and am excited to see what he churns out next.

I was huge fan of Nicolas Winding Refn's previous film Drive, so when I found out his follow-up would feature the same star (Ryan Goslin) and the same composer (Cliff Martinez), I made a special trip out of town to see the film in theaters as soon as I could. While a lot of people disliked Drive for it's lack of dialogue and overt stylization, I latched right on to it and Only God Forgives ups the ante even higher with more style and even less dialogue. However, I feel the movie more than makes up for it with amazing atmosphere, over the top violence and an intriguing story about the sordid underbelly of Bangkok's crime world. Not to mention that Vithaya Pansringarm's performance of the stoic cop out for justice is one of the best I've seen in a while. I can totally understand how some may find Refn's penchant for style over substance off-putting, but for me, Only God Forgives was the most exciting thing I saw on the big screen in 2013.
Labels: Bad Milo Elysium Kevin Mold! Only God Forgives Spring Breakers The Congress The Rambler The World's End Top 10 of 2013 WNUF Halloween Special You're Next