10. Much Ado About Nothing
I love that Joss Whedon made the third highest grossing movie of all time and followed it up by getting his drama nerd friends together and doing Shakespeare at his house. This film is full of Joss Whedon's usual bunch of actors from "Buffy" and "Angel" and "Firefly" and all that other stuff and it's very obvious watching it that these folks are all buddies and are having fun hanging out at Joss's house and playing make believe. Apparently, Joss and his crew get together and do Shakespeare for fun, even when they're not filming it (cue Kevin's drop of Homer screaming "NERDS!"). I don't get into a lot of Shakespeare (aside from "Hamlet" cuz it's metal as fuck), so the denser parts of this get understood at the rate of every other sentence for me, but the love and comedy and fun of this infect my blood like a happy Avian Flu. 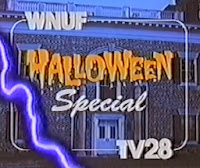 9. The WNUF Halloween Special
Speaking of being infected with a happy disease! This is the VHS recording of an infamous 1987 event where a local tv news reporter went to a haunted house for a Halloween special and the ghosts turned out to be as real as a CM Punk promo. Or so the story goes. This brought me back to the days of recording cool tv shows on VHS, dressing up in a plastic smock with a Frankenstein on it for Halloween and being so afraid of creppy spoopy old houses. This is a must-watch for anyone who digs nostalgia, Halloween or really fun found footage movies.

8. Frances Ha
A few years ago, Noah Baumbach won me over by making "Greenberg," the kind of movie I like the most: a story about a mostly unlikable guy doing almost nothing. And here, he does a very similar thing, except the titular character, Frances (played by the wonderful Greta Gerwig), is much more likable, even though she's probably more of a loser (or at least less sure of who she is than Greenberg was.) We follow Frances as she moves from couch to couch in New York while dealing with her friends growing up, while she just stays the same. There's not much of a plot, but the honesty and realism (and Greta Gerwig) carry everything with an almost Linklater-esque flawlesslness. This movie would be much closer to my number one if not for the fact that it has a weird and abrupt happy ending. Imagine if Rocky had just lost his edge, got beaten to a pulp by Clubber Lang, lost his title and then the film smash cut to Rocky getting his belt back and living happily ever after. It's weird.

7. +1
We just talked about this on JFD194, so I won't say much. But this takes all of Frances Ha's themes about being young and watching your friends start to move forward into the future while you just stay where you are. Except in +1, it's a literal thing that happens because of a freak space storm.

6. Wrong Cops
You've got to watch this movie with your guts! THIS is where movies happen. In your guts. In your organs! AFRICA! You understand?

After sort of kind of liking "Rubber" and "Wrong," Mr. Oizo cracked me in the fucking face with this movie. I haven't laughed so hard at a movie in a long time. It's surreality at its best. This has been (unfairly) I think, compared to stuff like "Tim and Eric," but I think the difference is that Tim and Eric makes no sense on any level, but the characters and situations in "Wrong Cops" make perfect sense within the reality of the movie. And that's what makes it funny to me. A cop sells dead rats full of drugs to kids. And the cop thinks that's perfectly reasonable. And that's funny.

5. Behind the Candelabra
You ever want to see two men act like there's no fucking tomorrow? Well, Michael Douglas and Matt Damon do just that. And they tell the story of Liberace, who was once the most paid entertainer in the world, yet had to live his life pretending to be engaged to various ice skaters to hide the fact that he was gay. It's a hell of an important story, especially when you fast forward to today when director Steven Soderbergh couldn't get this film financed to be released theatrically because studios didn't think anyone would want to see a movie about gay dudes. The great performances and Soderbergh's always sharp direction make this a pretty essential viewing experience.

4. The Battery
"World War Z" spent 400 million dollars to be a movie where most people saw it and shrugged with indifference. But with a budget of $6,000, "The Battery" managed to become a benchmark in zombie cinema. This is easily the best zombie film since "Shaun of the Dead," "Dawn of the Dead" and "28 Days Later" revived the genre in the early 2000s.

The story is one of basic survival between two acquaintances stuck together, despite the fact that they have wildly different views on their post-apocalyptic situation. Gorehounds might be disappointed, but the characters feel very real and the creeping, inescapable dread of the situation really permeates and makes for a unique entry in a tired genre.

3. Her
A guy falls in love with his phone. The summary says "Science fiction," but it's basically the realest concept for a movie in the year 2013. The film also has very real performances, despite the fact that one of them is acting against a disembodied voice and the other is playing a telephone.

2. Before Midnight
I guess my year-end list is basically movies where people just talk to each other and nothing much happens. And the Godfather of the movies where people just talk and nothing much happens is Richard Linklater, so it's a no-brainer that his newest flick is so high on my list. The "Before" trilogy is my "Star Wars." I love these characters and I love their lives and I can watch these movies endlessly and never get bored and I'd always catch something new. I have a few little gripes with this movie, like the references to current day politics that date this otherwise very timeless-feeling series or the fact that Celine feels more like Julie Delpy's character in her "2 Days" movies than the Celine from the "Before" movies. But my biggest complaint is also this film's biggest strength: I am not happy while watching it. For most of the first half, I'm frustrated and can't wait for Jesse and Celine to get away from their stupid friends and dumb kids and spend some time alone together, like I'm used to seeing (in the previous two films). And once they finally do, it isn't the romance I was hoping to see. These people fight and fight and don't seem to want to be together as much as I want them to be together. I just want things to be the way they used to be. And it saddens and upsets me. And I guess that's also how these characters feel. And that's the point.

1. The Wolf of Wall Street
This movie, like all Martin Scorsese movies, is endless entertainment. I (and probably everyone) can find "Raging Bull" or "Casino" or "Goodfellas" on tv, halfway through it and I'll stop everything, cancel all plans and watch the rest of it. No matter what. No matter who's funeral was scheduled that day. And "Wolf of Wall Street" will no doubt fall into that category. It's also a pretty brilliant satire of Wall Street and everything that goes with it (greed, excess, debauchery, etc.) But the most important aspect of this film is that it's purposefully juxtaposing these creepy Wall Street guys that are seen as villainous leaches with the mafia guys from "Goodfellas" that are generally seen as roguish anti-heroes. It also makes a point to show that the bum-deal trades Jordan Belfort does on Wall Street are basically as legal and easy and profitable as Joe Pesci burying a rat in the desert in "Casino." The movie asks why we celebrate villains and why we don't want them to pay for their crimes if they seem to have had fun while committing them. Also, lots of dudes snort lots of drugs out of sex parts of lots of hookers in this. And that's awesome.
Labels: before midnight Joss Whedon Plus One Richard Linklater the battery Top 10 of 2013 WNUF Halloween Special wolf of wall street