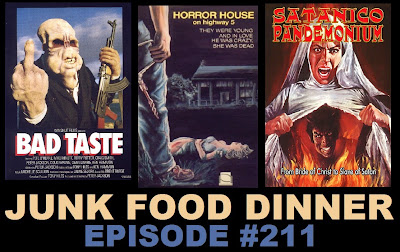 Evil aliens! Satanic nuns! Richard Nixon! This episode of Junk Food Dinner has it all, folks! Which is only fitting as we are joined by none other than the ghost of Mark Freado Jr to talk shit about some low-budget sleaze.

Up first, before Peter Jackson became dedicated solely to Hobbits, he was New Zealand's most promising young splatter-miester. His first feature, Bad Taste from 1987, was a low-budget labor of love and pulled out all the stomach-churning stops to tell the story of evil extraterrestrials coming to Earth to turn humans into fast food, and the goofy Kiwis out to stop 'em.

Next, we make a pit stop at Horror House on Highway Five from 1985. This ulta-low-budget straight-to-video slasher attempt features possibly Nazi/definitely crazy brothers and their father Bartholomew, a serial killer in a Richard Nixon mask, terrorizing a group of teens who just want to learn about rockets.

Finally, a nun in rural Mexico is seduced by Lucifer himself and begins to develope some very bad habits (get it!). Chock full of nudity, lesbianism, bright red blood and, of course, murder, it's Satánico Pandemonium from 1975 directed by Gilberto Martínez Solares.

All this plus witty banter between friends, mixed signals for your boner, Buckaroo Bonzai found footage, garage punk, Nerd News, Blu-rays, "Byron" from Mortal Kombat and so much more!

Got a movie suggestion for the show, want to give your opinion on a movie we talked about or just want to tell us we suck? Drop us a line atJFDPodcast@gmail.com. Or leave us a voicemail: 347-746-JUNK (5865).Also, if you like the show, please take a minute and subscribe and/or comment on us on iTunes, Stitcher, Blubrry or Podfeed.net.We are not only feuled by Satan but also your love and support.
Labels: aliens Bad Taste Gilberto Martínez Solares Horror Horror House on Highway Five nuns Peter Jackson Podcast Richard Nixon Satan Satanico Pandemonium