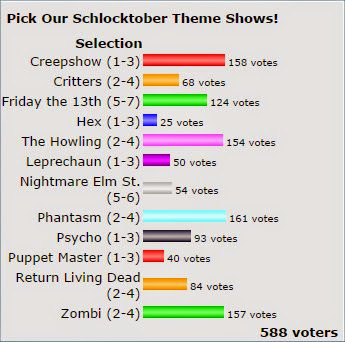 Hey, Junkies. Our Schlocktober poll is officially closed. You voted and picked four of the theme shows we'll be doing in October, as part of our 5th annual Schlocktober celebration! You can check out the results on the right. In addition to these, we'll also be doing a Michael Myers theme show the week of Halloween! It may mean nothing to you, but for the 1st time in JFD history, we'll be recording that episode live in person, as we're all meeting up in LA in October. We'll even be joined by Cumulus Frisbie (of Pool Party Radio) to make it a podcast crossover event for the ages.

We'll also be going to a horror marathon while in LA. If you're in the area, come hang out! Spend all night with your Junk Food Dinner pals at the Aero Theatre’s 9th annual Dusk-To-Dawn Horrorthon, in Santa Monica, California on October 25th! Exchange awkward glances during screenings of CREEPSHOW, GARGOYLES, THE THING, THE NIGHT OF A THOUSAND CATS, THE DEADLY SPAWN, BASKET CASE, and ZOMBIE HOLOCAUST, and enjoy uncomfortable silences in between the flicks! Also, they've got goobers. CLICK HERE FOR DETAILS/TICKETS!.