2014 was a strange but exciting year for movies, in my opinion. This is the first year in recent memory where I enjoyed several summer blockbusters just as much as a lot of the culty low-budget kickstarter and VOD releases (that were outstanding as well). As always, this list represents the small fraction of films I actually saw this year, so I'm sure there are many flicks that came out this year that I haven't caught yet that would wind up on this list if I were to go back and reevaluate it in a few months. Nevertheless, it was a great year at the movies, so without further adieu, here are the 10 I enjoyed the most this past year:

I am so glad that they are still making movies like Nurse 3D in 2014.  Douglas Aarniokoski's ultra-sleazy tale of a psychotic, methodical, murderous nurse (played to perfection by the sultry, boozy and almost-always-nude Paz De la Huerta) who obsesses over and stalks the lovely Katrina Bowden (who, in my opinion, between this and Tucker & Dale vs Evil is poised to become one of this decade's finest scream queens) is a gory, late-night cult film lover's dream from beginning to end. Plus it is in 3D!!!  One of my biggest regrets of 2014 is not catching this in 3D in theaters one late evening, but the blu-ray is a fine consolation for some schlocky midnight viewing.

9. The Grand Budapest Hotel (d: Wes Anderson)
I'm sorry, I like Wes Anderson films. You know what, fuck it, I'm not sorry. The Grand Budapest Hotel to be charming and a lot of fun to watch.
Wes Anderson makes beautifully shot, well-written movies with terrific ensemble casts that are touching and exciting. I get that some people find his whimsical style a bit over-the-top and precious but at least he has a distinct style all his own and I found

My girlfriend and I are both drummers, so I guess I'm a bit predisposed to enjoy a film that is all about drumming but I was quite surprised at how much I enjoyed this flick. J.K. Simmons is absolutely terrifying as an overzealous jazz music instructor who pushes the young Miles Teller beyond his capabilities to bring out the best in him. The film also leaves the viewer questioning their own work ethic and I found myself contemplating where my abilities as a drummer and as a person may have ended up if I had a mentor that was as harsh and driven as Simmons.

7. Cheap Thrills (d: E.L. Katz)
Cheap Thrills is a cool movie. The story of a down-on-his-luck schlub (Pat Healy) who finds himself on an increasingly intense night out with an old friend (Ethan Embry) and a kooky wealthy couple (David Koechner and Sara Paxton) who continuously pit Healy and Embry against each other in a series of bizarre dares for cash is endlessly entertaining until the bitter end. Plus as stated on the show, the use of Agent Orange's classic punk anthem "Blood Stains" over the end credits is the perfect punctuation mark on this insane ride.

It's amazing to me that Joe R. Lansdale's 1989 crime novel Cold in July hadn't been adapted to the big screen until now. However, I am very pleased with the results as Jim Mickle does a great job of bringing the tension of this story to life about a mild-mannered husband and father (the always excellent Micahel C. Hall), who kills an intruder in his home, only to be thrust into a mysterious and tangled web of crime and deceit. Throw in additional stellar performances by Sam Shepard and Don Johnson and Cold in July proves itself to be exactly the kind of thriller you enjoy coming back to for repeat viewings.

5. Dawn of the Planet of the Apes (d: Matt Reeves)

As a huge fan of the original Planet of the Apes series of films I have been very skeptical of this new
batch of Apes flicks. Considering most remakes and reboots basically suck and they already tried to reboot the series with Tim Burton to lackluster results, I had my reservations about this new series. I enjoyed Rise of the Planet of the Apes alright, but I was quite pleasantly surprised at how much I enjoyed the follow up Dawn of the Planet of the Apes. When the film first started I was immediately nervous by the presence of an all-CGI cast of apes that we were expected to connect with. "How are they going to make this work?" I thought. Well, to my surprise, not only did it work but the amount of emotion and personality conveyed through these cartoon monkeys was frankly outstanding. Plus, you've got apes on horseback firing machine guns, for Christ's sake. How much more can you ask for? 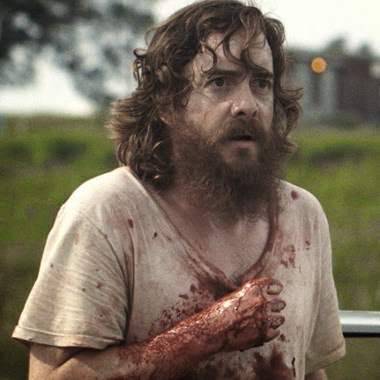 When you think of stylized revenge flicks, the first thing to come to mind is often creatively-lit shots of badasses spouting one-liners right before popping a cap in some villains ass, but what makes Blue Ruin so special is the how much it is not that. Jeremy Saulnier's low-budget tale of a man (Macon Blair) who has been devastated by his parents' murder only to seek revenge when he hears their killer has been released from prison is stark and realistic. It's a very accurate portrayal of what may actually happen if an inexperienced and damaged soul attempted to exact revenge like those in the movies. Add a terrific supporting cast and a great soundtrack, including an excellent use of Little Willie John's "No Regrets" and Blue Ruin may be the best revenge picture to come out this decade.

I wasn't quite sure what to expect when I went and saw Birdman this year. I had seen some of Alejandro González Iñárritu's previous films such as Amores Perros and Babel and was intrigued to see how he would tackle a spoof on comic-book action stars. So, while this movie was less of a spoof on comic characters and more an artsy look at a man (Michael Keaton in his best role in years) struggling to remain relevant , it still managed to be one of the best written and best shot movies of the year by far. In addition to Keaton absolutely killing it, we get tremendous performances by Edward Norton, Zach Galifianakis and Naomi Watts as well as a great soundtrack of jazz drumming (much like Whiplash) and some of the most creative camera work of 2014.

The Raid was hands down one of the best action/martial arts movies of the 21st century, if not ever. So, when I heard that they were making a sequel I thought "Good luck, it's going to be next to impossible to top that first one". Yet, somehow, Gareth Evans managed to raise the bar on everything that made the first one great. More complex and intense fight scenes, more plot and character development, more gore and bloodshed and even more stylized camera work and cinematography. I was lucky enough to catch The Raid 2 in theaters during it's brief wide release. I realize a 2+ hour foreign language sequel to a movie not many people saw is a hard sell, but it's a bummer not more people took a chance on this in theaters because it truly was one of the most thrilling movie-going experiences I have had in a long time.

If you're surprised that this Marvel summer blockbuster is my top pick for the year, I'm right there with you. I had heard good things about this but went into it not expecting much as I'm typically not a fan of these comic book movies, but the fact that James Gunn (who directed one of my favorite films of the last decade Super) was at the helm, gave me hope that this could be enjoyable. But goddamn, this thing blew me away. It was so fun, so well done, so funny, so touching, looked so cool and the soundtrack kicked so much ass, there was no way I couldn't have fallen in love. This movie is insanely rewatchable and gets better and better with each new viewing. I want to watch this all the time. I want to listen to the soundtrack constantly. I want the action figures. I want the t-shirts. This move made me feel like a kid again and is the most fun I've had with a movie in a very, very long time.
Labels: Birdman Blue Ruin cheap thrills Cold in July Dawn of the Planet of the Apes Guardians of the Galaxy Nurse 3D The Grand Budapest Hotel The Raid 2 Whiplash