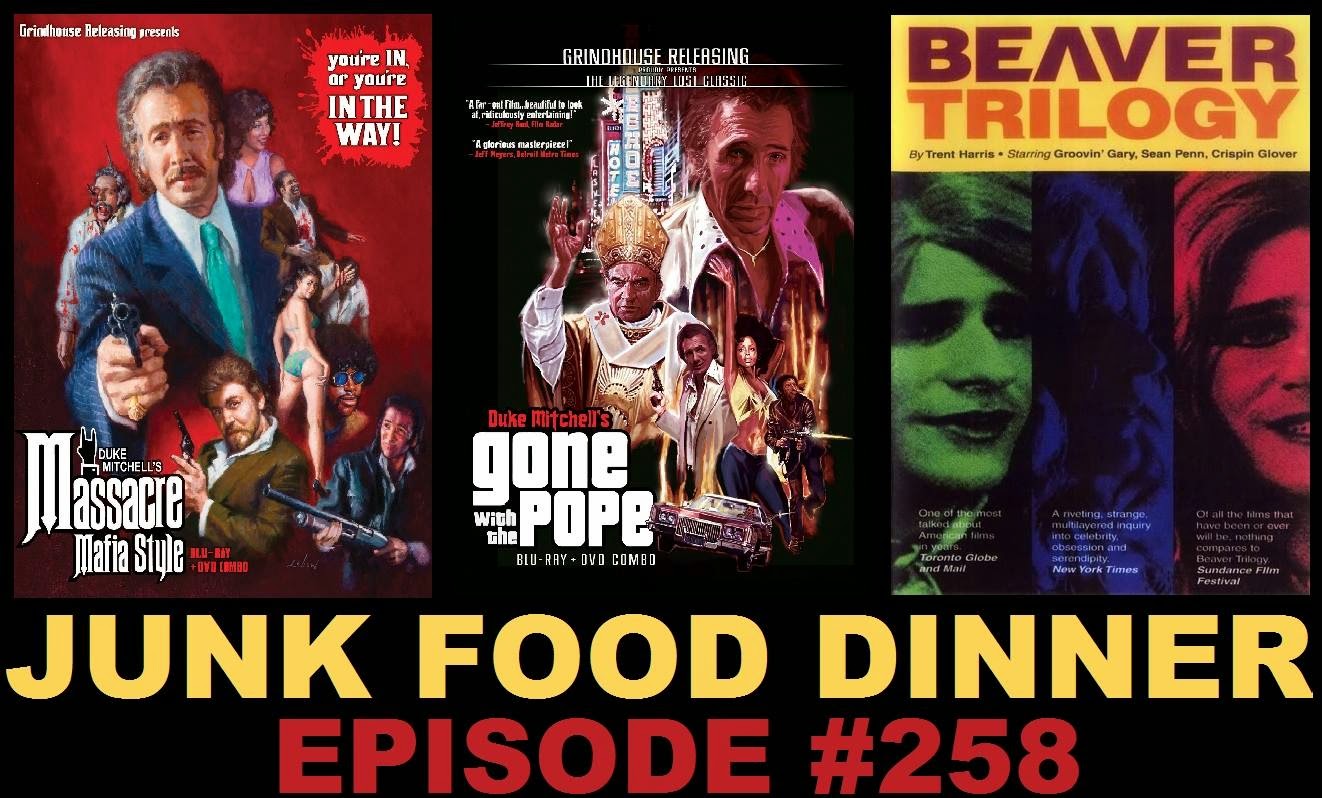 Parker’s taking his own mysterious desert vacation this week, and as a result we’re joined with another famous Daytonite, Ryan from the Illumi-Nati Podcast! It’s a wild ride as we discuss Duke Mitchell’s entire filmography (two flicks!), and an entire Beaver Trilogy (one flick!). Uncover the secrets of Italian American lounge singers and small-town talent shows together with us!

Up first, we delve into our accidental theme show with Duke Mitchell’s exploitation debut, Massacre Mafia Style (aka The Executioner, aka Like Father Like Son) from 1978! The son of a Sicilian mafia boss moves to Hollywood to stake his own claim to the family name. Duke Mitchell wrote, directed, stars, and provides the music for this sleazy grind house Godfather rip-off, which features some of the craziest exploding caskets you’ll ever find at any funeral.

Next! The Duke Mitchell insanity continues with Gone with the Pope from 2010! Previously unreleased and unfinished, Grindhouse Releasing went the extra mile to complete and restore this film decades later, and the result is as nuts as Duke’s first (and only other) movie. In this follow up, Duke finds himself involved in a plot to kidnap the Pope and demand a one dollar ransom from all the Christians in the world. And that ending!

Finally, we head up to the mountains and stop in a little town with some little secrets, with 2000’s The Beaver Trilogy. Comprised of three individual segments filmed over the course of several years, all covering the same subject, and featuring the likes of Crispin Glover and Sean Penn (as well as the music of Olivia Newton John), this movie is the weirdo 80s low-fi Rashomon/Hedwig mash-up you’ve always been waiting for! It’s weird in all the right ways.

Also, if you like the show, please take a minute and subscribe and/or comment on us on iTunes, Stitcher, Blubrry or Podfeed.net. We'll kidnap world religious leaders for your love and support.
Also be sure to check out the Tape Eaters Convention on Facebook, for all of your Ohio-area VHS Convention needs! This year it's being held on August 1st in Cincinnati, Ohio (you’ve heard of that place)! You might even run into one of your JFD pals (autographs only as time permitting).
Labels: action Courtney Gains Crispin Glover Cult documentary Duke Mitchell exploitation Grindhouse Groovin’ Gary Mafia Olivia Newton John Podcast Sean Penn Trent Harris