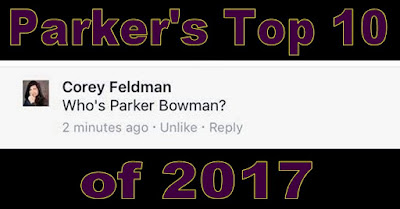 I liked a lot of movies in 2016, but here's the schlitiziest of them.

10. Frank & Lola (directed by Matthew Ross)
This movie's a lot like "Chasing Amy" except really sleazy and sexy and mixed with a really depressing old school crime noir. Michael Shannon and Imogene Poots are rad as hell and the movie's full of tough guy emotions. It's also set in Las Vegas, but not the Ocean's 11 part, the artsy, "normal" downtown part, which is rare to see on film.

9. Anomalisa
(directed by Charlie Kaufman)
I'm not normally the biggest fan of Charlie Kaufman, but his use of stop motion puppetry to tell a very human and uncomfortable story is about as heartbreaking as it gets.

8. Train to Busan
(directed by Yeon Sang-Ho)
Definitely one of the top 3 zombie movies of the last decade, this funny and touching South Korean flick follows a group of people on a train to what they think is safety from zombie hordes.

6. Everybody Wants Some!!!
(directed by Richard Linklater)
Cool bros drinking beer and having fun with their large muscles and cool cars. 100% fun.

5. Captain America: Civil War
(directed by the Russo brothers)
This movie exemplifies the best of what big blockbusters can do. There's a huge fight scene that is just an insanely fun spectacle followed by a tense unfun climax that holds real emotional stakes for very believable, flesh-out heroes. Also, extra points for Spider-Man, Vision wearing a sweater vest, one of the better Marvel villains and the "No You Move" speech.

4. Hacksaw Ridge
(directed by Mel Gibson)
Say what you will about Mel Gibson, but he makes large, oldschool movies that are rare these days. He's also really into the idea that suffering and horrendous emotional and physical pain can be transcendent. Which is what all of us Smiths fans already know and appreciate. Also, the film is about WWII, which is my jam now that I am an old, old man.

3. Arrival
(directed by Denis Villenueve)
The minutiae of humanity's first contact with aliens is more of an edge-of-your seat tense thrillride than all the "Independence Days" of the world, if done right. And Arrival does it right, while saying huge things about the minutiae of communication and humanity.

2. Hardcore Henry
(directed by Ilya Naishuller)
Fun, weird, violent, different, great soundtrack, amazing cast. Hardcore Henry has it all. I haven't found a movie so endlessly rewatchable in years. And if there were a JFD version of the Oscars, Sharlto Copley would have won for Best Actor.

1. Green Room (directed by Jeremy Saulnier
This movie is so tense and scary that I literally teared up during one of the scenes. I didn't even know that was possible. The cast is brilliant and, like I said on the show, between this and Blue Ruin, watching Jeremy Saulnier make movies right now must have been what it was like to be a genre fan when Carpenter was cranking out things like Halloween and The Thing during his high point.

Honorable Mentions: Final Deletion, De Palma, Pass Thru, The Conjuring 2, The Purge: Election Year, Teenage Mutant Ninja Turtles: Out of the Shadows, Beyond the Gates and Space Cop.