Well, it's finally happened. The apocalypse is coming. And what better way to celebrate than to look fondly back on that distant past, the magical and memorable and mystical year of 2016? Here's 40 movies I liked last year, with thoughts on ten of them. 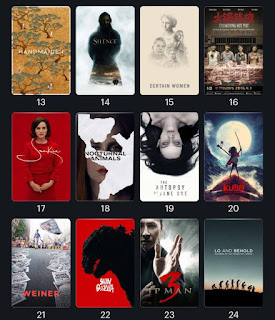 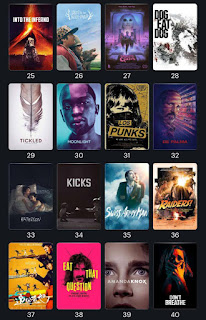 Here's a bunch of movies I liked this year but couldn't fit in. They're pretty much in order of preference, but as always these things are pretty subjective based on the phase of the moon.

Operation Mekong
Dante Lam's shaggy, action-packed war movie is probably a bit more ambitious than it is well-crafted, but it still packs a mean napalm-soaked punch. If John Woo had been working on bigger budget Cannon Films releases in the post-Rambo mid-80s, this movie would be directly ripping it off. But that didn't happen so you should probably just give this a shot instead. It's got some great slow-mo machine-gunning water battles with a ludicrous amounts of bullets expended. It's not high art, but it's a fun time.
Moana
I've got a mixed history with Disney, a company that has produced some of my very favorite things in the world (the charm and physical humor of the Ub Iwerks era Mickey shorts, the fantasy and living set decoration of Disneyland, the Wonderful World of Color), they've also produced a fair load of bullshit: the television wasteland of The Disney Channel, everyone's least favorite Halloween costume-turned-cartoon Frozen, barf-inducing post-Disney Pixar movies, horribly lame and visionless Marvel Universe movies, and what will probably turn out to be the ruination of Star Wars Universe as well (if it wasn't already ruined). But Moana's great! It captures the spirit of classic Disney musical animated features and offers a pleasantly imagined peek into a fantastically fascinating faraway world. I wouldn't have expected the hardest I'd laugh at a movie in 2016 would be at a Disney movie, but that "You're Welcome" song really got me somehow. Also, it wasn't a very funny year in general.

20th Century Women
The kind of warm, revealing, engaging, but hard-to-classify film often given the miserable label of "dramedy", 20th Century Women deserves to sit outside of simple categorization. It's a really nicely rendered look inside a believable family dynamic, with honest looks at middle aged ennui, teen angst, and the complications of sexuality across all ages. Certainly the most honest screenplay I saw this year, with dialogue that felt extremely true to life - Mike Mills really seems to be writing from his own life here. While a lightly comic take on an atypical American family isn't usually something I'd sign up for, the combination of that specific authorial voice, the nicely realized period touches (like the solid early post-punk soundtrack, and 1979 teenage bedrooms), and great performances from a well rounded cast really won me over.
Green Room
I wanna see Jeremy Saulnier have a long, John Carpenter-esque career where he keeps delivering lean and mean genre flicks at us in a classic-banger fashion. Here's to that beautiful dream.
O.J. Made in America
Is this a movie? Well, I saw it at the Laemmle's Music Hall 3 on Wilshire in Beverly Hills - that sturdy stalwart of nondescript art deco movie halls, the kind you find in Los Angeles only after years of staring past it down the block, waiting for a bus, and then the detailed edge work of the building becomes apparent, and you notice the faded old marquee still has current movie titles on it, and the single teenaged employee running snackbar and ticketbooth is actually a real person and not the ghost of cinematic memories past, who directs you to the plush red-upholstered screening room, smelling distinctly of the early nineteen-eighties, where initially you expect you'll enjoy a solo screening for the entire eight and half hour runtime (with ten minutes of trailers and two ten minute intermissions) but at the last minute are surprised to hear the loud, persistent coughs of a single older (seventies) man just one row behind, looking just as skeptical as you are that the entire theatre isn't just a weird lingering memory that doesn't exist in a corporeal sense and may just be prone to sudden vanishing spells but who nonetheless makes it about halfway through the movie before mumbling about a parking ticket after an intermission and leaving through the unusually heavy rain - so I think that qualifies it as a movie. It's a great movie.
The Love Witch
I love that Witch! Practically pulsating with poppy period presentation, this felt like a weirdly original way to do a throw-back flick, which are more and more common these days. It works on both a surface level pseudothriller, as a tongue-mostly-in-cheek send-up of them, and also on a third level as a stoned-out feminist kill-mantra. Be careful watching this in publicly monitored spaces.

The Neon Demon
Whenever people say "it's not for everyone, but I like it", it can seem like a weird humblebrag about having "unusual" tastes. That said, I like this Neon Demon, even if it's not for everyone. This may also be the most "big screen required" movie I saw in 2016. Even though it's not a big budget action movie, wasn't shot on IMAX, and barely got a wide release, this was one I was extremely pleased to have seen theatrically rather than at home. The element of having half the crowd freak out and walk out might have been part of the fun, but the kaleidoscopic collision of neon imagery and the Martinez soundtrack was so immersive projected on that huge silver slab. Having only seen it once so far, it's actually the kind of movie that I could see jumping up or dropping down in the rankings based on a second viewing, but that's something I'll have to find out for myself the next time it plays town.
The Wailing
In a year where several very good Asian films got (limited) American theatrical releases (and in a year where Asia got (wide) releases of very bad American films), The Wailing stood out. Memorable characters, just on the edge of comedic quirkiness but not enough to undercut the horror, help to draw you into the mystery unfolding in rural South Korea. Na Hong-jin's clever blend of police procedural and exorcism flick is full of surprises, and provides a great entry point to recent Korean genre cinema.
Arrival
Slower paced science fiction on the order of 2001 can be a fertile ground for social commentary, and there's plenty of that on the periphery of Arrival, with world leaders failing to reach simple compromises to maintain order when an alien species first make contact. Perhaps the big revelation here though is Amy Adams, who has been on a hot streak lately but really does a great job with her character here, striking a perfect balance of warm reliability and intelligent authority in a role that isn't often given to women in Hollywood's current climate. Jeremy Renner's not bad, either! And the cinematographer here should be commemoratively bronzed and hung on a wall after his death. See it!
La La Land
This is a movie that's been endlessly discussed (on Junk Food Dinner and elsewhere), but it certainly struck a chord with me in a way no other movies in 2016 did. While some of the backlash criticisms seem silly and overreaching to me (ascribing whitesplaining/mansplaining issues to this is one of the rare cases where even I get a tinge of 'the SJW blues'), I can see the point in others; specifically, this is a film heavily concerned with nostalgia, which is at best a masturbatory pursuit and sometimes can be an actively destructive force. If you're the type of moviegoer who has a gut aversion to nostalgia, it's going to be a hard sell. But it's the way in which Damien Chazelle marries modern filmmaking techniques with a golden age aesthetic that validates his exercise in historical romanticization. Were this film not so dizzyingly well-executed, with pitch-perfect editing, beautifully staged and photographed sequences, and remarkably evocative costuming, it could feel like a lame duck attempt to replicate something that was special for the time, but weirdly anachronistic now. Gosling and Stone's performances, particular in single-take scenes requiring them to sing, dance, and play piano in cheat-preventing close-ups, only help to draw the viewer into Chazelle's fantasy world. The result, even after four screenings, had me intermittently grinning and tearing up consistently throughout the entire runtime. And while there might but not a whole lot of social relevance, or mind-blowing new concepts on display in La La Land, as a pure experience, a blending of images and sounds in sequence, it cannot be topped this year.
Labels: 20th century women arrival Green Room Junk Food Dinner la la land moana oj made in america operation mekong Podcast sean byron The Love Witch The Neon Demon the wailing Top 10 Top 10 of 2016 top ten