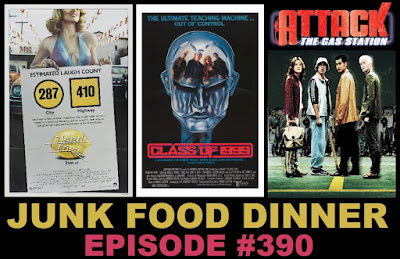 It's our monthly Patreon donor picks show as we take a look at three movies picked by those special folks who are brave enough to put their money where their mouth is!

Up first, Kurt Russell and Gerrit Graham are two sleazy used car salesman who have to pull some wild stunts to move automobiles after their owner (Jack Warden) dies and the owner of a rival car lot (also Jack Warden) tries to put them out of business in Used Cars from 1980 directed by Robert Zemeckis.

Next, in the grim future of 1999, gangs have taken over schools all over the country so a government opportunist played by Stacy Keach decides to try and whip the students into shape with the aid of cyborg killing machines programmed to be teachers (including Pam Grier) in Class of 1999 from 1990 directed by Mark L. Lester.

And finally, a gang of hoodlums take the employees of a gas station hostage and run the pumps and cause trouble over the course of a night in the 1999 Korean action comedy Attack the Gas Station.

All this plus witty banter between friends, did Earthquake see 9/11? Killer Queen chat, a retro Junk Mail voicemail, our world famous weekly Nerd News and Blu-ray Picks, continued lack of overt police involvement, and a whole lot more!

Also, if you like the show, please take a minute and subscribe and/or comment on us on iTunes and check out our new Patreon and Youtube as well. Follow us on Facebook and Twitter! We'll pick your movies with your love and support (and money).
Labels: Attack the Gas Station Class of 1999 Gerrit Graham Jack Warden Kurt Russell Mark L. Lester Pam Grier Podcast Robert Zemeckis Stacy Keach Used Cars