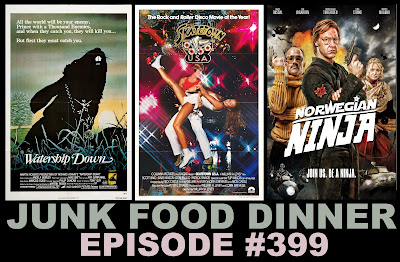 This week, the Patreon donors gave us their picks and we gave them to the Randomizer 5000 and got three movies that couldn't be any more different!

Up first, it's the movie that traumatized a million children, Watership Down from 1978. What seems like an innocent cartoon about cute little bunnies turns out to be a violent and bleak story about the horror and reality of death.

Next, we take a coked-up rollerskating tour of late-70's disco culture in Skatetown USA from 1979. Starring Patrick Swayze (in his first film role), Scott Baio, Marsha Brady herself Maureen McCormick and Billy fuckin' Barty, this colorful and zany time capsule has long been sought after by connoisseurs of vintage cheese.

And finally, we examine the stylized true story (with plenty of artistic liberties taken) of Commander Arne Treholt who trains a clan of ninjas to save Norway during the Cold War in Norwegian Ninja from 2010.

All this plus dashcam videos hit the big screen, Sean sees Phantom Thread for the 15th time, voicemails from the Pacific Northwest, Razzie Nominations, more awful dreck from the guy who did Werckmeister Harmonies and so much more!

Got a movie suggestion for the show, want to give your opinion on a movie we talked about or just want to tell us we suck? Drop us a line atJFDPodcast@gmail.com. Or leave us a voicemail: 347-746-JUNK (5865).
Labels: Billy Barty Norwegian Ninja Patrick Swayze Scott Baio Skatetown USA Watership Down