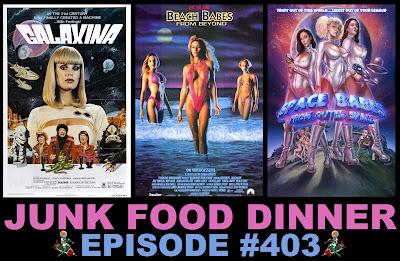 Hang on to your rockets, because this week we blast off with three "space babes" movies for Sci-Fi-ebruary! And we're joined by Heather and Justin of the Compañeros podcast.

Up first, Playboy Playmate Dorothy Stratten plays a sexy space android on a crew of goofy space cops including the dad from Monster Squad in the Crown International Pictures drive-in classic Galaxina from 1980.

And finally, one of the most recent entries into the "space babes" subgenre, the aptly-titled Space Babes from Outer Space from 2017. Once again a trio of space babes crash land on earth and need the sexual energy from men to power their ship back home.

All this plus stories about parties at Parker's house, movies that make us cry, kids getting creative at the movie theater, mic issues and so much more!

*We had some issues with Justin's mic so his audio quality/volume is a little off at times. Please forgive us.

Got a movie suggestion for the show, want to give your opinion on a movie we talked about or just want to tell us we suck? Drop us a line atJFDPodcast@gmail.com. Or leave us a voicemail: 347-746-JUNK (5865).
Labels: Beach Babes from Beyond David DeCoteau Dorothy Stratten Galaxina Joe Estevez Linnea Quigley Podcast Sci-Fi Ebuary Space Babes from Outer Space