JFD405: The Girl Can't Help It, Possession, The Dark Backward 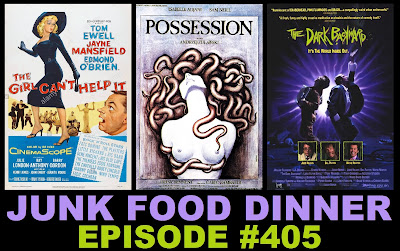 Up first, former Looney Tunes animator Frank Tashlin brings us a story about a washed up mobster (Edmond O'Brien) who hires a drunk music agent (Tom Ewell) to make a star out of his bombshell girlfriend (Jayne Mansfield) all while encountering various early rock 'n stars such as Little Richard, Fats Domino, Eddie Cochran and Gene Vincent in The Girl Can't Help It from 1956.

Then, Mark (Sam Neill) and his wife Anna (Isabelle Adjani) are splitting up. However, this divorce soon becomes very strange and intense as both Mark and Anna begin losing their goddamn minds and it is revealed that Anna has been involved in some weird shit in 1981's Possession, directed by Andrzej Zulawski.

And finally, Judd Nelson plays a terrible aspiring stand-up comic who's only friend is his garbageman buddy played by Bill Paxton. But when he inexplicably starts growing a third arm out of his back, a sleazy agent played by Wayne Newton sees this as an opportunity to exploit the deformity and strike it big in The Dark Backward from 1991.

All this plus Chris's chili preference, movies we got lucky to, Oscar talk, marijuana in movie theaters, stories about uninvited neighbors, and so much more!

Got a movie suggestion for the show, want to give your opinion on a movie we talked about or just want to tell us we suck? Drop us a line atJFDPodcast@gmail.com. Or leave us a voicemail: 347-746-JUNK (5865).
Labels: Bill Paxton Frank Tashlin Isabelle Adjani Jayne Mansfield Judd Nelson Little Richard Podcast Possession Sam Neill The Dark Backward The Girl Can't Help It Tom Ewell