JFD406: Night of the Juggler, Fade to Black, Annihilation 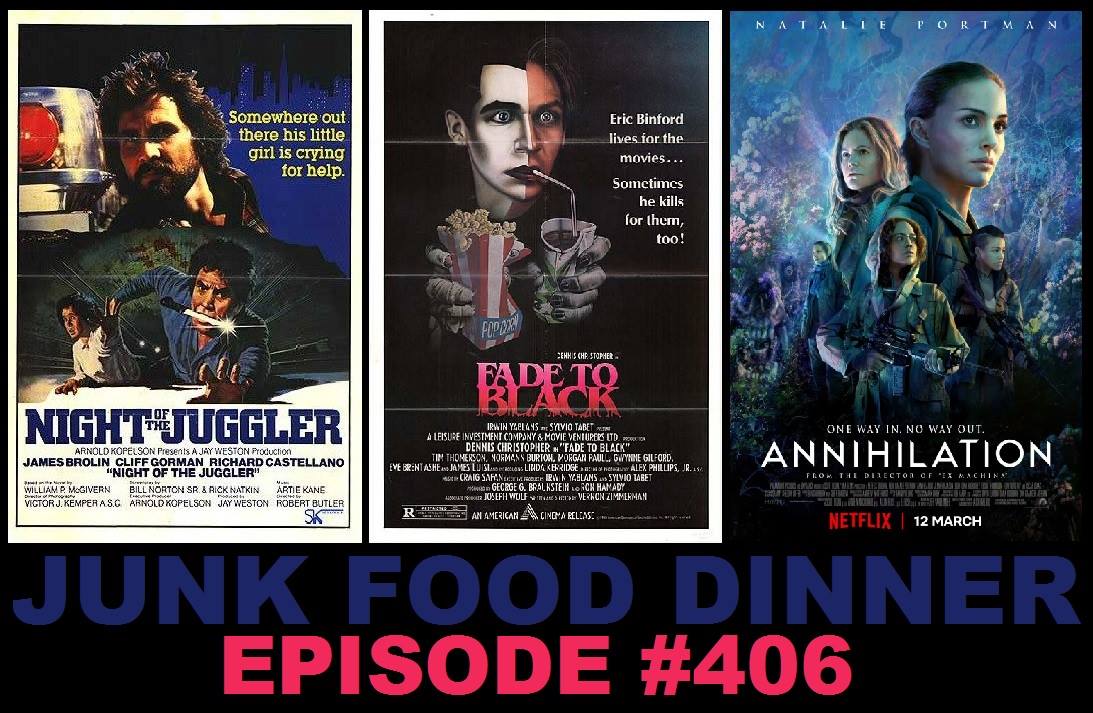 Strange fellows discuss strange films in these strange times, this week, on the show. It's an odd mixture of weird characters, locales, and activities, chronicled audiovisually for our digestion, which then spurs some unusual opinions and interactions between our hosts. This kind of bizarre event is not considered to be a regular occurence, and must not be missed.

First up: what is a Night of the Juggler, from 1980? It's an off-the rails NYC child-abduction action-thriller starring James Brolin and that dude from the Angel movies. You know the dude.

And then! You gotta hear about the time we reviewed Fade to Black, also from 1980. It's got that kid from Breaking Away, except this time he's a movie-obssessed creep with a murderous streak. He kind of reminds us of Wayne.

Finally! You'd better believe we're reviewing Annihilation, the new Alex Garland sci-fi flick from 2018. We never claimed we'd review anything else. Never in a week where a Natalie Portman-led expedition team is sent into a mysterious zone where things don't return from. We'd be fools to do so!

All this plus witty banter between pals, the best statues of Drax the Destroyer to drive your car through, the tried and true timeless tradition of Parker's generosity, the heebee jeebee's, mad cokehead strength versus the toughness of Richard Masur, Parker's Hotdog Birthday Jubilee, flannel tuxedos, how not to make think people think that some guy wormed your chick, the perilous plight of the person who was trans-Marilyn, a late callback to Thankskilling, Parker's intense and well-documented love of fractals, our weekly news and Blu-ray Picks, silent coughs, latent belches, no rides offered (or taken), major-key nose whistling, snide-ways glances, freshly-squeezed gleekspit and a whole lot more!

Also, if you like the show, please take a minute and subscribe and/or comment on us on iTunes, Stitcher, Blubrry or Podfeed.net. Check us out on Facebook and Twitter! We'd love to see some of your love on Patreon - it's super easy and fun to sign up for the extra bonus content. We'd never know what a juggalo is without your love and support.
Labels: action Alex Garland Annihilation Fade to Black James Brolin Juggalos Junk Food Dinner Los Angeles Marilyn Monroe Natalie Portman Night of the Juggler Podcast sci-fi slasher