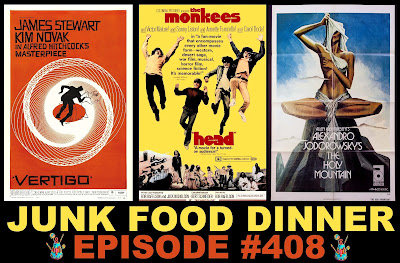 This week JFD celebrates 8 years of bringing the finest in cult cinema to your eagerly awaiting ear drums! To capitalize on the occasion, we continue our annual tradition of recounting our top 5 favorite and bottom 5 least favorite movies we've covered on the last year of the show as well as reviewing 3 classic cult bangers!

Up first, James Stewart plays a detective in San Francisco who has recently been afflicted with acrophobia but still takes a gig to follow a friend's wife (Kim Novak) who may be possessed by the spirit of a dead woman in Alfred Hitchcock's Vertigo from 1958.

And finally, Alejandro Jodorowsky follows up his insane psychedelic epic El Topo with an even weirder, even more ambitious piece of surreal cinema, The Holy Mountain from 1973.

All this plus bad jokes during Robocop, HorrorHound Weekend rundown, plugs for freaky vampire soundtracks, hottest TV moms, surprising opinions and so much more!