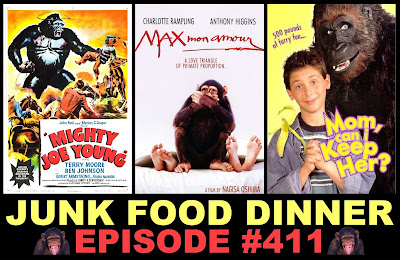 Grab your bananas, chimps! Ape-ril rolls right along as we take a look a three very different monkey movies!

Up first,  the creative team behind King Kong, Ernest B. Schoedsack and Merian C. Cooper re-team with stop-motion Kong master Willis H. O'Brien and his young protege Ray Harryhausen to bring another giant ape story to life in Mighty Joe Young from 1949.

Next, we take a look at a very strange French movie about a dude who finds out his wife is having an affair with a chimpanzee and then invites said chimp to live with his family in Nagisa Ôshima's 1986 comedy(?) Max mon amour.

And finally, schlockmiester Fred Olen Ray directs this silly kids movie about a kid (the oldest brother from Malcolm in the Middle) who finds a gorilla that has escaped from a sleazy circus promoter (wrestling's Terry Funk) in the 1998 straight-to-video Mom, Can I Keep Her?