JFD420: Up in Smoke, Mallrats, Fear and Loathing in Las Vegas 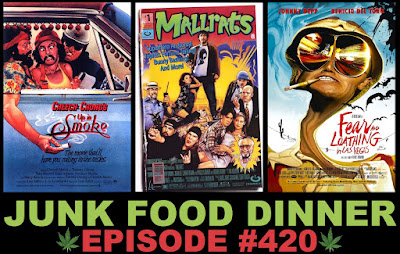 It's our 420th episode, so you know we were obligated to do a stoner-themed episode, right? So. this week we travel back to our HIGH school daze and revisit some of the flicks we watched while blazin' out in our parents' basements.

Up first, we take a trip with Cheech and Chong in one of the first stoner comedies ever Up in Smoke from 1978. Lou Adler (Ladies and Gentlemen, The Fabulous Stains) directs this pot themed romp about two dudes traveling around in a van made of weed.

Next, Kevin Smith follows up his critically acclaimed debut Clerks with another (albeit higher budget) comedy about slacker dudes struggling to understand the opposite sex in Mallrats from 1995 starring Jason Lee, Shannon Doherty, Jeremy London and Michael Rooker.

And finally, Johnny Depp plays Hunter S. Thompson taking a *trip* to Sin City with his attorney Dr. Gonzo played by Benicio Del Toro in Fear and Loathing in Las Vegas. Terry Gilliam directs this psychedelic adaptation of Thompson's novel with a bold visual flare and far too many cameos to list here.

All this plus dad chat, favorite stoner characters, the drive-in celebrates 85 years, Tales from the Hood part 2 chat, high school memories and so much more!