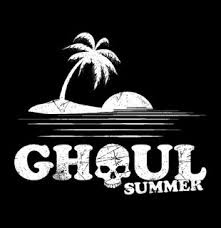 It's that time of year again! The most horrible time. Ghoul Summer!! (And also two weeks that are slightly less ghoulish.)