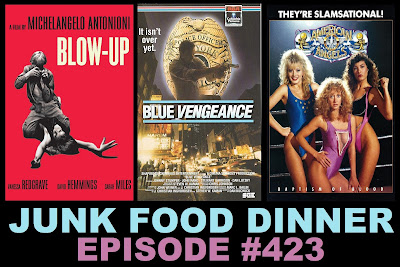 Break out your vintage camera, your old heavy metal records and your female wrestling tapes because this episode of JFD really has something for everyone!

Up first, Michelangelo Antonioni directs his first English-language flick about a photographer in swinging 60's London (played by David Hemmings) who captures, what appears to be a murder, while taking pictures in the park in Blow-Up from 1966.

Next, a cop teams up with a punk rock photographer to track down an escaped mental patient who's going around New York City killing members of his favorite heavy metal band when they fail to join him in his Satanic pact in Blue Vengeance from 1989.

And finally, a stripper turns pro-wrestler in the 1989 flick American Angels: Baptism of Blood. This movie is filled with female wrestling, midgets and long butts and is from the husband/wife directing team that brought us Gatorbait and Rocktober Blood.

All this plus DisneyLand chat, Netflix nostalgia, Nic Refn's latest vanity project, Y'all Got Species calls and so much more!