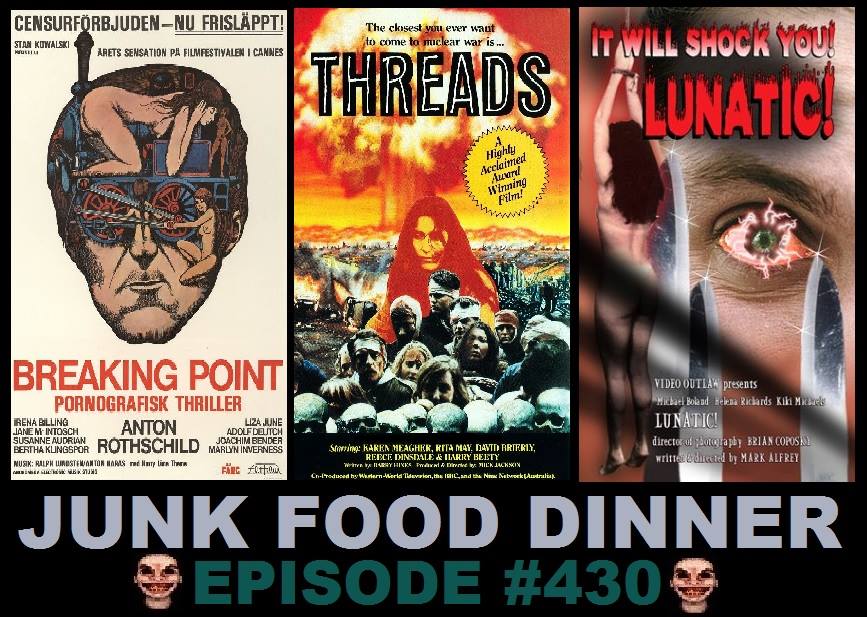 It's the final week of Ghoul Summer for this year, and maybe forever if Ghoul Summer heel Kevin Moss gets his way. But can even he stomach this week's trio of ghoulish flicks before making that kind of executive decision? Tune out for the thrilling conclusion to this arbitrary cliffhanger.

Next up! It's Ted Turner's favorite British TV movie about a theoretical nuclear strike on Sheffield England, Threads (from 1984). It's completely ghoulish and nothing more or less. Not suggested by any Justins.

Finally! It's the Ghoul Summer film some JFD hosts are calling "better than Beach 24" - of course, we're talking about the SOV serial killing obscurity Lunatic (from 1999 according to IMDB). It's got more low-budget breast augmentation than a Monday in Beverly Hills. And it was totally recommended by a Justin.

Also, if you like the show, please take a minute and subscribe and/or comment on us on iTunes, Stitcher, Blubrry or Podfeed.net. Check us out on Facebook and Twitter! We'd love to see some of your love on Patreon - it's super easy and fun to sign up for the extra bonus content. We'll only consider bringing back Ghoul Summer with your love and support. Also, check out these weird new shirts!
Labels: Breaking Point cult movies Ghoul Summer Horror Lunatic murder Nuclear Holocaust Podcast Rape rape revenge Serial Killer Threads