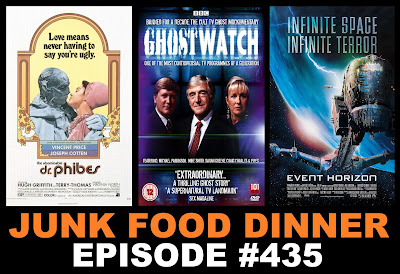 This week on JFD, it's the second week of Schlocktober and we're partying with three movies picked by our world class Patreon donors.

Up first, Vincent Price plays a music and theology-loving mad man who is exacting revenge on a group of doctors who couldn't save his wife in 1971's The Abominable Dr. Phibes from AIP.

Then, we watch a 1992 British television special called Ghostwatch where actual BBC presenters pretended to be investigating a haunted house on Halloween and managed to fool a good portion of the UK viewing audience in the process.

And finally, Sam Neill and Laurence Fishburn lead a crew of space explorers on a mission to track down a lost space vessel. But when they find it, it turns out the ship is haunted and causes some crazy reactions from the crew in Event Horizon from 1997.

Got a movie suggestion for the show, want to give your opinion on a movie we talked about or just want to tell us we suck? Drop us a line atJFDPodcast@gmail.com. Or leave us a voicemail: 347-746-JUNK (5865).
Labels: Event Horizon Ghostwatch Laurence Fishburn patreon picks Sam Neill Schlocktober The Abominable Dr. Phibes Vincent Price