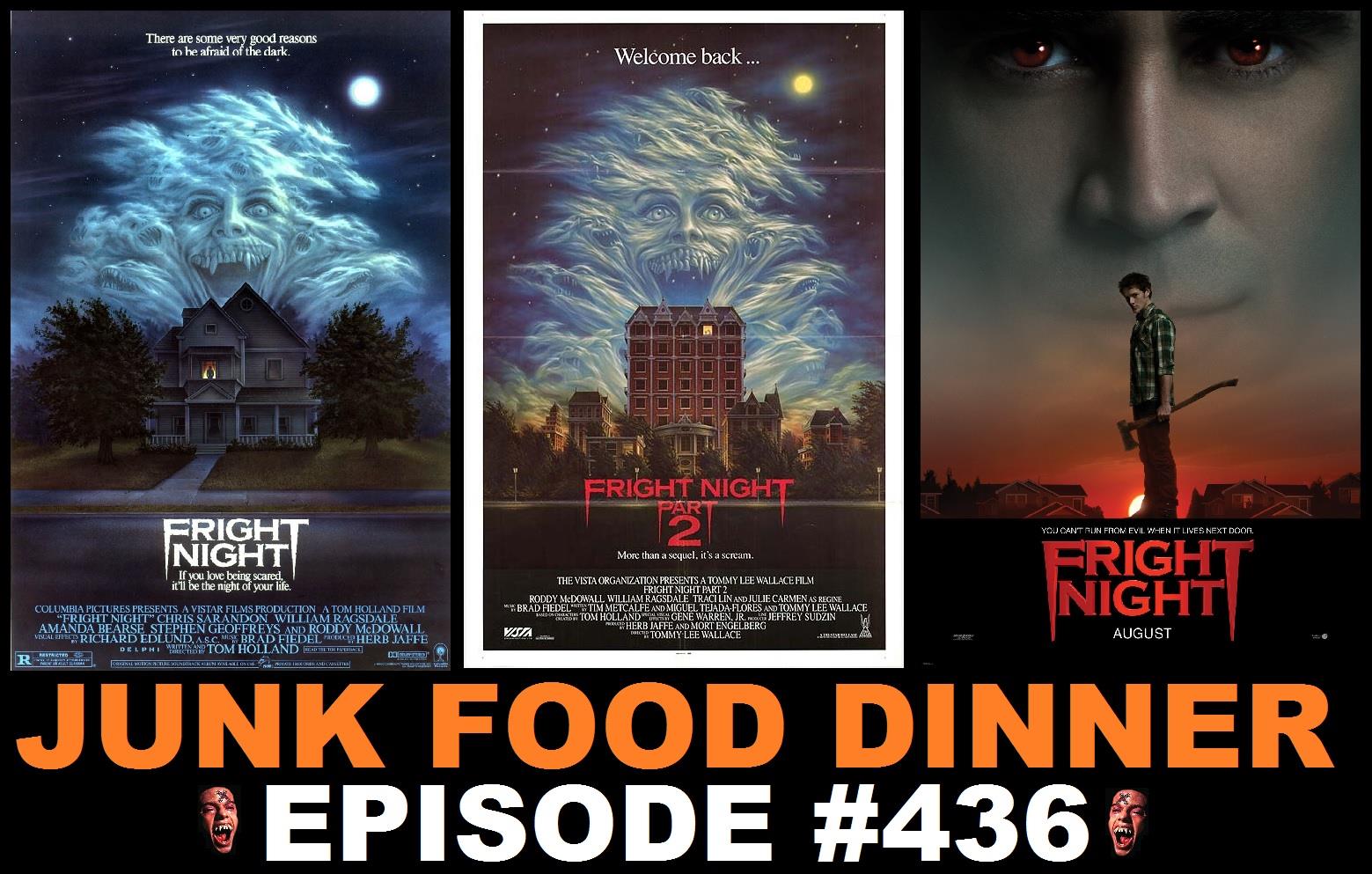 Get ready to scream your head off, Junk Food Junkies, with your favorite trio of Vampire Next Door flicks ever crammed into a single franchise umbrella. It's our in-depth take on the world-renowned intellectual property licensing opportunity FRIGHT NIGHT (presented by DreamWorks Pictures). And to top it off, we're joined by none other than hatless Jackson Stewart, director of Beyond the Gates and known Fright Night aficionado!


Up first! It's not the Ferrel-based feature you're thinking. It's the original videostore classic, 1985's Fright Night. Written and directed by Tom Holland, this classic tale of teenage vampire suburbia paranoia is one we're all excited to chat about.

Next up! It's that weird 1988 sequel, Fright Night Part II that some folks inexplicably have a soft spot for. But will any of your JFD hosts and/or guests fall under that inexplicable mold? Tune in to find out. It's the only way.

Finally! It's the completely newer and more recently released version of this classic film tale, 2011's Fright Night. I'll tell ya it stars Colin Farrell and a buncha other people but I'm too tired to write much more on the subject. It's a remake of the one you know and love, but with more CGI blood.


All this plus all the jointed limbs you could want, semi-extended Candy Corn chats, we see you Fairborn Ohio, Kevin reveals his #1 Halloween candy go-to snack, Parker gets testy about listicles, yet another Valiant Comics reference, the scary implications of podcasting to a public audience of all ages (aka Kevin curses at children), jokes about the Disney corporation, distant rumblings of spooky concerts, a trip to the Magic Manor at Eastwind Mall, a classic Ragsdale defense, werewolf transformations by Rick "James" Baker, an unfair attack on the late Sir Christopher Lee, TCM Piracy Cruise lines, an unexplained resurgence in the popularization of the Shadmock theory, a passing reference to aspect ratios, our weekly news and Blu-ray Picks, mild Skype noises, rides offered (and taken), splunky beats and a whole lot more!

Also, if you like the show, please take a minute and subscribe and/or comment on us on iTunes, Stitcher, Blubrry or Podfeed.net. Check us out on Facebook and Twitter! We'd love to see some of your love on Patreon - it's super easy and fun to sign up for the extra bonus content. We'll advertise our Halloween wares on local television with your love and support. Also, check out these weird new shirts!
Labels: Colin Farrell Fright Night (1985) Fright Night (2011) Fright Night Part II Jackson Stewart Junk Food Dinner Podcast Schlocktober Tom Holland Vampires