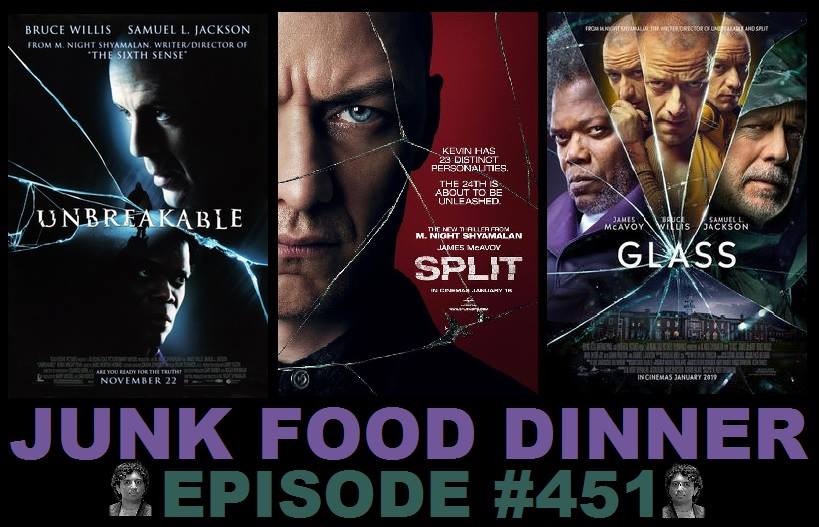 If you've survived the Polar Vortex, there's only one possible explanation: your burning desire to hear your charming JFD hosts chat about these three M. Night Shyamalan films has kept you just toasty warm enough for your heart to keep beating. And we've got good news for you, living being: your avoidance of death was well worth it this week. This ep's a doozy.


Up first! Way back in the pre-9/11 days of yore, a young man named M. Night Shyamalan crafted a superhero feature unlike most before it, a little film that would be come to be known as Unbreakable from 2000! Bruce Willies survives a wild train crash (with nary a scratch), which puts him in the sights of a mysterious (EVIL?!) stranger played by Samuel L. Jackson.

Next up! It's 2016's Split, as directed by M. Night Shyamalan. It's not the other movie called Split from the same year or the year after or before. Make sure you're on the same page as us here. We're talking about the one where James McAvoy kidnaps a few young women and it turns out he's got a bunch of multiple/split personalities, each more terrifying than the next (except for some of them). Be sure that's the Split you've got in mind when you pop this podcast episode into your hi-fi.

Finally! It's a third movie: Glass, which is literally still in theatres right now today as I write this, if you can even believe it. This is M. Night Shyamalan's thrilling conclusion to the loose trilogy formed by the above two features, and it features Bruce Willis, Samuel L. Jackson, and James McAvoy, all together on-screen at once in the meeting of the minds that all filmgoing audiences have been begging for with bated breath.


All this plus watchin' Glassmen in certain circles, super fun fly facts (or was it superfly fun facts?), the names and identities of who picked the movies for the show this week, are these movies even sci-fi?, some movie website called Letterboxd that Kevin ain't even heard of yet, "now who's old?", Eurocentric ethnotypes, a non-negative quantity of audio drops, Parker gets actually heated at Sean in the junkmails segment, RIP Dick Miller, a Seinlanguage shout-out, does Kevin Make An Appearance?, automatic lipstick mechanisms, Sean learns his lesson again about the terrors of filmgoing at the AMC Monterey Park location, mental health TED talks, our weekly news but zero Blu-ray Picks, what even is a Skype?, no mention of ride-giving, crunkle-junked beats and a whole lot more!

Also, if you like the show, please take a minute and subscribe and/or comment on us on iTunes, Stitcher, Blubrry or Podfeed.net. Check us out on Facebook and Twitter! We'd love to see some of your love on Patreon - it's super easy and fun to sign up for the extra bonus content. We become unwitting superheroes via your love and support. Please avoid checking out this embarrassing merchandise!
Labels: Anya Taylor-Joy Bruce Willis Glass James McAvoy M. Night Shyamalan Samuel L. Jackson sci-fi Sci-Fi-Ebruary Shyamalanaverse Split Unbreakable